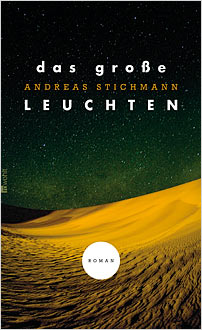 Andreas Stichmann is one of a number of recent graduates of the Leipzig Literature Institute to achieve critical acclaim. The Glowing, his first novel, is a beautifully observed coming-of-age story.

We join the orphaned narrator, Rupert, and his schizophrenic adoptive brother, Robert, on their journey to Iran in search of Ana. Ana is a first-generation immigrant whose Persian father has never adapted to life in German exile and whose Communist mother has barely been seen during the last twenty years, but is supposedly living secretly in Tehran. Ana steals from petrol stations and wears shirts with pictures of skulls. She is also Rupert’s first love. Lively and impulsive, Ana dreams of becoming a film maker and making a documentary about her mother.

But the road to Ana is full of obstacles. Arriving in Iran, Rupert and Robert are confronted with a world that seems irreconcilably at odds with Western culture. The chaos, the desert heat, but also the sense of community and the basic kindness of strangers – all these things leave Rupert feeling as if he has flown in from a different, more ‘autistic’ planet. Significantly, it is Robert who copes far better with the demands placed upon them. It is perhaps he, rather than Rupert, who can truly be said to have ‘come of age’ by the novel’s end.

The novel follows a pleasingly unconventional narrative structure, with much of its dialogue taking the form of reported speech. The story of Rupert and Robert’s quest to find Ana alternates with episodes from their childhoods: the suicide of Rupert’s mother, Robert’s diagnosis with schizophrenia, and summers spent together in the wilds of Germany. It becomes clear as the narrative progresses that Rupert is just as troubled as his brother. He is increasingly overwhelmed by existential angst which leads to physical disorientation and ultimately undermines his credibility as a narrator. Are any of the events he describes real? Does he exist only in Ana’s head? Or she only in his? Like dreams, the answers remain tantalisingly elusive.

This lyrical and philosophical novel is disquieting at times, but also gently humorous and highly accessible. Its portrayal of the cultural clash between East and West is rendered fresh and original by virtue of the complex and unpredictable characters.

Andreas Stichmann was born in Bonn in 1983 and has spent time in both Iran and South Africa. He now lives in Hamburg. In 2006 he was a finalist in the Open Mike literature competition, the most important competition for German writers under thirty-five. A collection of stories, Jackie in Silber, was published in 2008 to widespread acclaim. He has since received numerous literary awards.