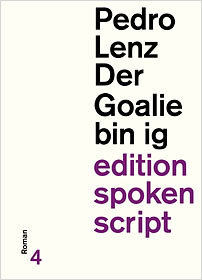 With echoes of Steinbeck’s Of Mice and Men, Lenz’s powerful new novel builds on the author’s considerable success in performance and oral storytelling, and exploits the charms, warmth, humour, rhythms and musicality of spoken language.

The first-person narrator, the ‘goalie’ of the title, is a lovable rogue who earned his nickname in his youth when, after a football match, he stepped in to protect the actual goalkeeper when the other players turned on him. ‘The goalie’s me!’ he insisted, taking the blame – not for the last time – for someone else. We meet our goalie much later, when he has just been released from prison after serving time for drugs. Here, too, he was the scapegoat. When the police found drugs at his local, he named no names – and, in court, spent more time justifying his stories than defending himself. On his release, and typically broke, the goalie returns to his home town, the fictional provincial town of Schummertal (Fog Valley). He falls in love with Regi, who serves behind the bar at his local, and who already has a boyfriend.

The goalie, crucially, is a sucker for a good story. He lives and breathes them; is forever telling stories to himself and others. While this means that, for the reader, the novel is a charming and often hilarious tour through anecdotes about the regulars at his local, or the goalie’s trip to Spain with Regi (he has Spanish roots, but also dubious friends with a house in Spain), this obsession with narrative does have its downsides. Storytelling can be his way of avoiding problems and conflict. It also irritates Regi, who concludes that it isn’t a woman the goalie needs, but an audience for his stories. Tragically, he also falls for the stories of so-called friends – stories that lead to his downfall. But his trip to Spain enables him gradually to realise that his friends lied to him, when they offer conflicting explanations for the house there. The novel closes with the goalie leaving Schummertal to try life, alone, in the city.

Clearly influenced by the oral traditions of storytelling, The Goalie’s Me grew out of a six-month residency in Scotland and invites comparison with the works of Roddy Doyle and Irvine Welsh. Lenz is an immensely spirited author whose public appearances always cause a stir, and his new novel has the undoubted ability to reach new and younger audiences.

Pedro Lenz was born in 1965 in Langenthal. He studied Spanish literature at the University of Bern and has worked as a freelance writer for various newspapers and magazines since 2001. Lenz is very active on the Spoken Word scene, and has won numerous awards and poetry slams. He was nominated for the Swiss Book Prize in 2010 for his first novel, Der Goalie bin ig, which is also to be made into a film. www.pedrolenz.ch

Der gesunde Menschenversand was founded in 1998 by Matthias Burki and Yves Thomi, initially selling CDs, books, and magazines, as well as organising readings and poetry slams. Burki soon began to publish books and CDs, with a continued focus on Spoken Word and poetry.