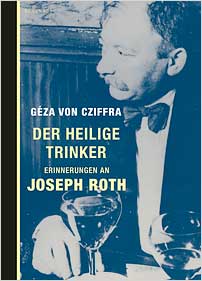 This pleasingly presented book first and foremost recreates the circumstances and atmosphere of the extraordinary period through which Joseph Roth, writer and journalist, and his contemporaries lived. The last of the vast Austro-Hungarian Empire and the shifting identities of its subjects, fin de siècle Vienna, the First World War, Berlin and Paris in the 1920s and 1930s, the problems of Jewish identity and experience, the explosion of new art forms (especially Expressionism), the need to adapt to changes in technology, living, ideas, mores, political systems: it is a formidable list of challenges and, with the Second World War looming, makes one wonder how more people did not succumb, as Roth did, to depression and alcoholism. The photograph on the front of the jacket shows Roth in later life, elegant in jacket and bow tie, a glass of wine before him, but with the sagging jowls and puffed eyes which give away his habit. Despite all the tell-tale features, however, he has an air of observation and attention, so although the photograph of him in his early thirties is in startling contrast, the expression of alert and observant amusement is recognizable as a feature common to both. In addition the author of these memoirs, a film maker, screenwriter and producer, meets us as another man-about- Europe in his frontispiece portrait: bow tie, stiff collar, cigarette holder languidly clasped between long fingers.

Roth seems to have been a disaster for those who lived with him day by day, but an important stimulus (as well as a financial liability) for those who saw him less frequently over many years, on whom he had an animating and inspiring effect. ‘Sacred’ in this respect? Part of the reason, at any rate, why he is still a name to conjure with. And certainly in his literary works he marshalled into a convincing and lucid sequence the perceptions, fantasies, insights and reactions which otherwise hurtled chaotically through his mind and conversation.

This book is a masterly evocation not only of the man but also of a particular epoch in Europe, the ‘family history’ of many descendants of émigrés and an important antecedent to the Holocaust. It will gain, let us hope, a wider readership* here for Roth himself.

* Much of his writing is available in excellent translation in reasonably priced paperback editions, for example those by Michael Hofmann with Granta.

Géza von Cziffra was born in Hungarian Arad in 1900. He was best-known as a director of successful and popular films, mostly in the comic vein. He was also a reporter, artistic director at the theatre, the writer of plays and screenplays, and in his later years he published a number of books including memoirs. As a frequenter of cafés in Vienna and Berlin he became acquainted with such figures as Else Lasker-Schüler, Egon Erwin Kisch, Kurt Tucholsky, Bertolt Brecht and many others. He died in 1989 in the small Bavarian town of Dießen by the Lake Amersee.

Contact details for the publisher of this edition are as follows:
Berenberg Verlag
Ludwigkirchstrasse 10a
10719 Berlin, Germany
Tel: +49 30 21 91 63 60
Email: info@berenberg-verlag.de
Contact: Petra and Heinrich von Berenbergwww.berenberg-verlag.de