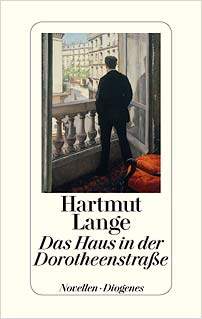 The House in Dorothea Street is a collection of five short stories all set in the suburbs of Berlin. Hartmut Lange’s writing displays a haunting lyricism which is achieved by contrasting factual, objective language with the inexplicable or even supernatural.

In the first story of the volume, ‘The Eternity of the Moment’, Michael Denninghoff has cast off everything after the death of his wife Kathrin. He now stalks the streets around their old flat, suddenly desperate to possess a poster of a French Impressionist painting which they once bought together. When he finally gains entry to the flat to discover the poster gone, the new occupant turns out to be a divorce lawyer who informs Denninghoff that he and Kathrin might well have got divorced anyway. As with many of these stories, the ending is ambiguous: Denninghoff disappears, leaving his taxi by the canal. Some notes which we see him write before his disappearance remain tantalisingly undiscovered.

In all the stories everyday scenarios develop in unexpected and sometimes extraordinary ways. In the title story, a journalist, Gottfried Klausen, is made a correspondent in London; his wife, Xenia, prefers to remain behind in Berlin for the time being. Klausen watches a Royal Shakespeare Company production of Othello and when the volcanic ash cloud prevents him from returning to visit Xenia, he becomes plagued by the suspicion that she is betraying him. In the wonderfully surreal story, ‘The Mayor of Teltow’, the mayor of the title is increasingly bothered by a crow he has started seeing on the back seat of his car. He goes to great lengths to avoid it, but by the end it is in his office and looks as if it is there to stay. The final story, ‘The Shadow’, is a chronicle of a marriage breakdown cum ghost story. When Philipp Trautwein comes home, his wife Steffi always knows he’s back by the shadow she sees at the window. But then Philipp is spotted in town when he is supposed to be away on business, and Steffi begins to see the shadow even when he’s not there. Obviously unable to rely on her husband any more, she begins to rely on the shadow instead.

This is an atmospheric collection, with beautifully observed depictions of suburban Berlin’s overgrown canal banks and saloon cars sidling home through the gloaming to their owners’ secluded villas. Lange’s exquisite depictions of the uncanniness of human life as well as the nightmarish potential of suburbia seem ready-made for an art-house film.

Hartmut Lange was born in 1937 in Berlin and studied theatrical production. In 1960, he became theatrical producer at the Deutsches Theater in East Berlin. After a trip to the former Yugoslavia he did not return to the German Democratic Republic, but instead settled in West Berlin, where he worked as a theatrical producer and director. He has been honoured with several awards for his plays, essays and prose.