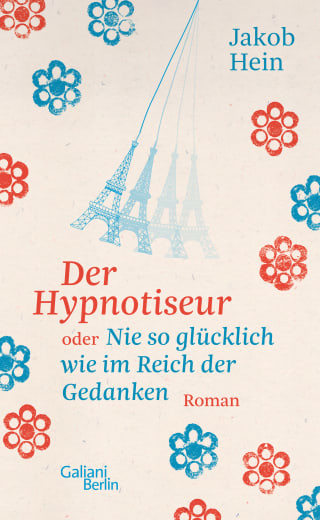 A light-hearted novel set in the 1980s in which a hypnotherapist enables East Germans to escape the limitations of life in the GDR by going on fantastical foreign travels in their minds.

Lieselotte Sawidskihas lived in the same quiet farming village in the Oder valley for as long as she can remember, next to her neighbor Gerda. Gerda’s grandson Micha comes to live with his grandmother, and when Gerda dies he stays on in the old farmhouse. Lieselotte and the other inhabitants of the village begin to notice strange goings on. More and more young women, and strange ‘modern’ looking visitors are seen staying at the farmhouse. They all have the same, farawaylook in their eyes. The villagers begin to suspect foul play, speculating that Micha is running a cult, or even worse that he’s organizing foreign travel, which is impossible – and illegal – in the GDR. But the truth is far more prosaic.

Micha has a skill for hypnotherapy, learned from one of his lecturers, and word has got out that he can help you travel anywhere you desire, without ever leaving his couch. Anika is one of the first women to visit him. She is obsessed with Paris, and when she visits Micha in the old farmhouse, she is instantly transported on the trip of a lifetime, including a passionate love affair on the Champs Elysees. Back in the real world she decides that she must stay with Micha, but she cannot tolerate the rural squalor he seems so used to. She has the house connected to running water, heating and even electricity, bribing the local agricultural committee chairman, Klempow. To maintain their cover, and avoid attracting the suspicion of the Stasi, Micha and Anika enlist the help of local ‘artist’ Einar to help them avoid the appearance that they are making a profit from illegal private enterprise. His strange glass artworks are ‘sold’ to their visitors, who leave a donation at the farmhouse for their stay.

The farmhouse becomes a hive of activity, with droves of mainly young women coming to set up home with Micha, working harmoniously together while simultaneously disappearing on fantastical trips under hypnosis. However, a strange woman called Anneliese turns out to have been working undercover, and a few days later the Stasi swoop in, arresting everyone and taking possession of the considerable sums amassed through visitors’ donations. Micha and Anika and the women are kept in isolation in prison, and interviewed for weeks on end. Through sheer luck the GDR comes to an end, and they are all released.

The novel ends with a long letter from Juliane, one of the women, to another, Marlen, reminiscing about their idyllic time together on the farm, and worrying about Micha, who has returned to the dilapidated farmhouse, and lives in poverty now that the west is open, and travel is possible in the real world instead of just the imagination. She suggests they all club together to help him, and repay him for the perfect time they spent there.

This is a fast paced, deceptively simple story, with engaging characters and a lot to say about human nature. An enjoyable read that will appeal to readers of Ruth Hogan and Matt Cain.

Jakob Hein was born in Leipzig in 1971, and lives in Berlin with his family. He works as a psychiatrist and writer, and has written 17 books. His most recent novel, Hypochondriacs Live Longer, about his work as a psychiatrist, was a huge German bestseller.

Jakob Hein, born in 1971, works as a psychiatrist and has published 17 books. His book Hypochondriacs Live Longer (2020) was on the SPIEGEL bestseller list for several weeks.