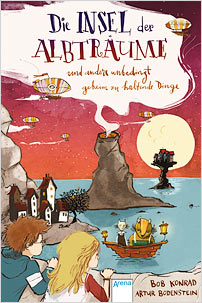 Bob Konrad’s assured young adult debut builds on his highly successful career writing for children’s radio and TV. The Island of Nightmares takes young readers on a fast-paced journey into a fantasy realm beyond their wildest dreams – or nightmares …

A labyrinthine city where it’s impossible to get your bearings, a seething volcano and a girl with marble eyes – Rocky’s worst dreams come true one night, when he finds himself trapped on the Island of Nightmares. He meets weird and wonderful creatures with horns on their heads, aggressive talking bears and a crazy professor. The only way for Rocky to escape is to overcome his greatest fear. And the only person who can help him is the mysterious girl with the marble eyes.

Rocky has been having the same nightmare over and over again, so one night he decides to escape his dream by staying awake. To his surprise he discovers airships moored outside every house in his street and mysterious goat-like creatures coming into people’s homes. One seems to be looking for him. He takes refuge inside an airship and finds himself transported to the Island of Nightmares, home to all the monsters created in people’s bad dreams. Rocky finds another intrepid human being there – Doctor Heinrich Hahn, an explorer in search of new worlds. But to their horror, the Grand Old Lady who rules the island has decreed that any humans who go there should be thrown into the volcano. After all kinds of adventures, Rocky learns to face his fears, makes friends with the girl with the marble eyes, and finds his way home to his family. Although he keeps dreaming of the girl, his dreams are no longer nightmares.

This lively, irreverent book is sure to capture its readers’ imagination, and to have them chuckling along the way. Fans of fantasy fiction will delight in the creative details which bring Rocky’s out-of-this-world adventure to life. The story of Rocky’s exploits is interspersed with humorous illustrations and excerpts from Doctor Hahn’s travel journal, ensuring there is always something new to draw the reader’s attention. The Island of Nightmares is a consummate adventure story which whets readers’ appetites for more from this talented author.

Bob Konrad was born in Heidelberg in 1968 and has been writing audio books and TV series for children for nearly twenty years. These include Der Ohrenzeuge (‘The Ear Witness’) and OLIs Wilde Welt (‘OLI’s Wild World’). He has also penned several scripts for Löwenzahn. The debut author of children’s books lives and works in Berlin.

Artur Bodenstein was born in Vienna on a Friday the 13th in the year 1974. He studied graphics at the Vienna Graphics Teaching and Experimental Institute and lives there too. He has drawn just about everything that creeps along or crawls about or doesn’t move – except the East African naked mole rat. The reason why he does so many illustrations is because his handwriting is abominable. His crawling letters actually look like pictures; therefore it would have been better for him to have lived in Ancient Egypt. Yet since it no longer exists, he is forced to draw pictures – including, recently, the East African naked mole rat.

Arena Publishing was founded in 1949 and is today one of the most important publishers of books for children and young adults in Germany. Arena publishes a broad range of titles in its fiction and nonfiction lists; its programme includes titles for all age groups – from toddlers up to young adults. Arena was the first German children’s book publisher to start a paperback programme in 1958. Books from Arena have won numerous awards and are translated into many languages. Arena is also the German home of internationally well-known authors like Cassandra Clare, Roderick Gordon and Brian Williams as well as Tove Jansson, Jo Nesbø, Unni Lindell and Neil Gaiman.