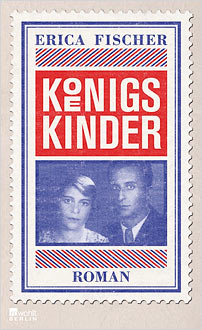 Erica Fischer’s novel tells the extraordinary love story of her own parents, who were separated in a shameful, littlediscussed and fascinating chapter of British history.

Fischer’s parents meet in Austria in the early 1930s. Her mother, Irka, is a Polish Jew and her father, Erich, a Viennese former Catholic. Irka flees Vienna for England in 1938 and Erich follows her to London a year later. Like many refugees, they find domestic work in southern England. But their incipient sense of belonging is rudely shattered in 1940 when, out of the blue, Erich is arrested as an ‘enemy alien’. He is interned at Huyton near Liverpool along with over 2,000 other German and Austrian men between the ages of sixteen and sixty. It was a widely-held misconception by the British public that refugees from National Socialism were Nazis or ‘Fifth Columnists’, leading to years of mistreatment and prejudice towards them. Erich is soon deported from Huyton to Australia. The ship, His Majesty’s Transport Dunera, sets sail on 10 July 1940 with 2,500 deportees on board the overloaded vessel.

Fischer vividly evokes the appalling conditions during the Dunera’s two-month voyage to Australia. The men are locked up below deck in incredibly cramped quarters with floors slippery from overflowing latrines and sea water to wash with. In harrowing scenes which recall the treatment many of the refugees have already experienced at the hands of the Nazis, the British soldiers assigned to guard the men beat them and steal their belongings. The ship’s commanders tolerate and even encourage this abuse. Working together to alleviate the misery of their circumstances, the refugees form a strong bond. The rich details with which Fischer captures the physical surroundings on board the ship, combined with her sensitive portrayal of the psychological challenges faced by the deportees, ensure that readers readily identify with the refugees’ plight on board the Dunera.

Once the ship reaches Australia, Erich is transferred to another camp. He and Irka establish a precarious correspondence but the couple increasingly despair of being together again. Even when Erich is finally returned to England he is interned for months while his release papers are being processed. But the novel’s concluding sentence, ‘The bell rings’, heralds Erich and Irka’s reunion and brings to a close this exceptional story of love lost and found.

Erica Fischer was born to an émigré couple in England, and the family returned to Austria in 1948. In Vienna, Fischer studied at the Institute for Interpreting, became one of the leaders of the Austrian women’s movement, and worked as a journalist. Nowadays she lives in Berlin as a freelance writer and translator. Her true-life story Aimée & Jaguar was a bestseller, and has been translated into twenty languages.