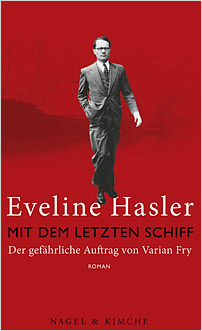 The Last Boat Out describes the heroic work of Varian Fry, an American journalist who saved the lives of hundreds of leading European intellectuals during World War II. The flight of European refugees from fascism has proven of great and lasting interest to English-language readers, and this work will be no exception.

In 1940, Fry, who wrote for The New York Times and was among the first to alert the American public to the dangers of Nazism, was asked by the newly-formed Emergency Rescue Committee to establish an office for them in France. The purpose of the ERC was to arrange the safe passage to the United States of leading European writers, artists, and intellectuals. Fry agreed and founded the Centre Américain de Secours (American Relief Centre) in Marseilles that same year. While operating as a legal French relief organisation, the Centre also illegally procured exit visas and passports that would allow their recipients to exit Vichy France for Spain and Portugal. Fry and his co-workers devoted themselves to this hazardous task in the face of growing opposition not only from the Vichy government, but from American officials in France. Fry was considered too progressive, placed under surveillance as a Communist sympathiser, and finally forced to return to the United States in 1941. In the short time that Fry was working in Marseilles, he saved hundreds of lives: an illustrious list of exiles and refugees that includes Heinrich Mann, Anna Seghers, Marcel Duchamp, André Breton and Walter Benjamin.

Eveline Hasler’s captivating historical drama is full of personal anecdotes that give the reader a sense of the real Fry. The book’s final section covers the years following Fry’s return to the United States, where he was barred from the office of the ERC after publicly criticising it, and continued to be accused of Communist sympathies. Varian Fry died at home in 1967, while working on an edition of his memoirs for young people. Thirty years after his death he became the first American to be honoured with the title ‘Righteous Among the Nations’ by Yad Vashem.

The Last Boat Out joins a growing body of rescue literature, including Fry’s own Surrender on Demand and the forthcoming English translation of Anna Seghers’ novel, Transit, whose enduring popularity is due not least to the great contributions to world literature and thought made by those who were rescued.

Eveline Hasler was born in Glarus, Switzerland, and now lives in Ticino in Switzerland. Her novels have been translated into many languages and have
won numerous awards.