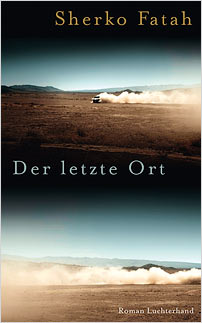 Albert is a German drifter who travels to Iraq with the vague intention of drafting a few magazine articles. However, his world crumbles when he is kidnapped in an opportunistic attack, along with his local interpreter, Osama. We watch as Albert tries to make sense of his predicament from the hut in which he is incarcerated. Separated from Osama, his means of deciphering the local language and culture are gone and he is utterly disorientated.

After some time the two are reunited and start up a tentative friendship. Albert is aware that Osama, having lived through the war, is unable to understand his voluntary excursion into dangerous territory; indeed, for this very reason he is viewed as a probable spy. For his part, Osama becomes frustrated when Albert fails to understand that their assailants do not see the interpreter as ‘one of them’; despite their shared language and culture, he is viewed as a traitor and an unbeliever. As they are moved from place to place, sometimes together and sometimes apart, they try to discern their kidnappers’ motives and guess at what is likely to happen to them next. Their guesswork is made even more uncertain by the marked incompetence of their kidnappers and the chaotic nature of the whole enterprise.

Eventually, Albert and Osama seize upon an opportunity to escape, although they split up in order to be less conspicuous. Wandering through the desert without water, Albert is soon recaptured. Osama manages to reach a coastal village, where he recognises a local man as one of his childhood friends, Abdul, who drives him away from the area and towards an unnamed city. But as Osama nears safety, he is overcome by guilt at having left Albert behind, and persuades Abdul to turn back. In a further twist, it turns out that Abdul is, in fact, an emir with links to a terrorist Sunni group, and now decides to take revenge on Osama for an incident that took place in their youth.

The whole novel is laden with suspense, sickening near-misses and small victories. Albert and Osama are wonderfully drawn through their authentic dialogue and inner musings, and the reader will be longing to know their final fate.

Sherko Fatah was born in 1964 as the son of an Iraqi Kurd and a German mother. He grew up in East Germany and in 1975 moved to West Berlin with his family via Vienna. He studied philosophy and history of art. He has received numerous awards for his narrative work. Der letzte Ort is his fifth novel. His novels have been translated into seven languages.

Luchterhand Literaturverlag was founded by Hermann Luchterhand in 1924 and has been publishing literary titles since 1954, an early and triumphant success being Günter Grass’ novel Die Blechtrommel (The Tin Drum, 1959). Its list includes literary fiction and poetry as well as definitive editions of selected writers’ complete works. In 1997, the firm was voted Publishing House of the Year by the German trade journal Buchmarkt. It is now part of the Random House Group. Authors include Christa Wolf, Ernst Jandl, Pablo Neruda, António Lobo Antunes, Will Self, Frank McCourt, Hanns-Josef Ortheil, Terézia Mora, and Saša Stanišic.