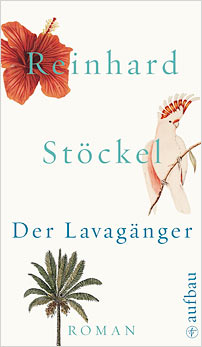 Henri Helder, the pivotal character in Reinhard Stöckel’s daring first novel, is, like many of his forbears, a railway worker in the eastern part of Germany. Born in 1955 and aged 49, he is committed to his job (the railway timetable is said to be his bible). But computerisation and privatisation are now putting it under threat and, to crown his misfortunes, his wife chooses this moment to leave him and move to Brussels. His response to all this is not to start pursuing young women, but to set out in pursuit of traces of his maternal grandfather, Hans Kaspar Brügg, the eponymous lava walker last heard of in Hawaii. With the ancient’s other possessions he inherits a pair of worn-out shoes made from the skin of a pet tiger owned by a dervish called Ahmad. His first thought is to throw these battered old objects away. A series of coincidences, however, changes his mind, and an even more curious and wide-ranging series of events, both recent and not so recent, are then unfolded before the reader’s eyes.

To start with, we are transported to the scene of the building of the Berlin-Baghdad Railway, on which Grandfather Brügg has elected to work to keep his son out of the First World War and where he witnesses the Turkish persecution of the Armenians. Here his beautiful girlfriend Siyakuu is carted off in a train and the tiger is shot. But his friend Ahmad says the shoes made from the beast will lead to love and so it proves, for Siyakuu survives the massacre and they are reunited, but only by chance and after many other peregrinations, ending up in Polynesia. But by this time Siyakuu is married to a professor called Malinovski, who believes there was once an equivalent to Atlantis somewhere under the sea, and equally strongly disbelieves in the Nazis’ theories about the ‘Aryan race’.

The rest of this wildly extravagant but brilliantly written picaresque novel the reader must learn for himself (including why Brügg is called The Lava Walker). He will find the book a delight to read and also, surely, agree with its underlying thesis, which consists in a powerful bash at phoney ideologies and utopias of all sorts, whether merely fanciful or downright wicked. An enthralling and subtle tour de force.

Reinhard Stöckel was born in 1956. He studied at the Institute of Literature in Leipzig and has worked as a librarian, journalist and foundry worker. In the 1980s and 1990s he wrote for various newspapers and magazines. In 2002 he published his first volume of short stories. ‘The Lava Walker’ is his first novel. Reinhard Stöckel lives with his family in Saxony, near the Polish border.

Rights to this work already sold to:
Norway (Gyldendal Norsk)