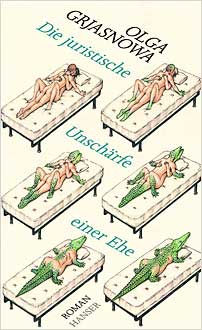 The latest novel from the acclaimed author of All Russians Love Birch Trees focuses on race, sexuality and love within a ménage-à-trois relationship in Berlin.

Leyla grew up in middle-class Baku in post-Soviet Azerbaijan, before being sent to the Bolshoi boarding school in Moscow to become a ballerina. A teenage affair with another girl at the school would have resulted in her being expelled, had it not been for her mother’s connections.

Back in Baku, a matchmaking attempt sees her introduced to bachelor doctor Altay. Realising that he is also gay, she suggests that that they do indeed marry, to keep their families at bay. The couple end up in Berlin, where Leyla gets a post at the ballet, Altay in a hospital. They work hard and play hard: clubbing, taking drugs and having casual relationships with partners of the same sex. But they also love each other, and sleep with each other alongside their affairs. When Jonoun, an artist from Brooklyn, enters their lives, she poses the first serious threat to their marriage. Altay hates her, although her relationship with Leyla is somewhat on-off.

Leyla injures herself, forcing a break from dancing and doubts about it as a career, and returns to Baku, where she falls in with the children of the elite, whose current craze is racing in fast cars through the city. This lands Leyla in prison, where she is beaten, and Altay is forced to come and help release her, taking Jonoun with him. Even though Leyla is freed in days, he stays on, spending time with his family, but also exploring the city.

All three are now in Baku, where the book closes. Leyla and Jonoun take a road trip through Azerbaijan and Georgia, while Altay starts a relationship with Farid, the son of a politician. In the end, after sinister warnings from various authority figures including Farid’s father, Altay and Leyla return to Berlin together. Jonoun has gone travelling on her own to Turkey, it is unclear what will become of Altay and Farid’s relationship, and Leyla … is pregnant.

Grjasnowa’s book is a highly convincing picture of the fluidity of queer lives and identity in post-Soviet, globalised Europe, and effortlessly charts the fast-paced and complex lives of its three Berliners.

Olga Grjasnowa was born in 1984 in Baku, Azerbaijan, grew up in the Caucasus, and has spent extended periods in Poland, Russia, and Israel. She is a graduate of the German Institute for Literature in Leipzig. In 2011 she was awarded the European Border Crossers Prize by the Robert Bosch Foundation. She is currently studying dance science in Berlin.