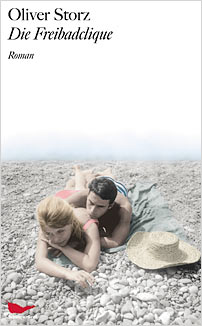 Die Freibadclique is a short and sharp novel about the ‘class of 29’, a group of German boys who are fifteen years old in 1944, the very youngest group to be drafted into the Nazi war effort in an atmosphere of political chaos, poor military training and sinking morale. The action starts in the late summer of that year. The Russians are at the gates of Warsaw, the Western Allies are nearing Aachen, and a gang of five adolescents hang around the local outdoor swimming pool lusting after a pretty young woman called Lore, as boys are wont to do. Soon they will be called up to military service. A year later, when the war has been lost, only two of them (the narrator and his friend Bubu) return to school.

Although offered as fiction, the book is based closely on the experiences of author Oliver Storz, who also turned fifteen in the small town Schwäbisch Hall in 1944, and was also conscripted into the German armed forces. It is a coming-of-age novel in which we know pretty much from the outset that few of the participants will have an adult life. The narrator tells us bluntly at the very beginning that one of the boys, nicknamed Zungenkuss, will be dead eight weeks later. Another, Knuffke, a war-orphan from the heavy bombings on Berlin, will stay with us through most of the novel’s course, but we are warned of his imminent death, too.

The atmosphere of the novel is that of disillusionment, melancholy, and even tragedy. Knuffke is murdered because of his involvement in black-market dealings and murky Allied-German relations at the end of the war. The beautiful dental nurse Gunda tells the passion-struck narrator how she has made herself sexually available to men to save her skin on the Polish-German border. And the narrator himself, when he finds that he does not have the will and courage to avenge Knuffke’s death through yet another murder, strikes the final note of lost idealism and innocence.

This story brings out fresh notes. The crisp dialogue and the depiction of the nebulous world of adolescence work well. Memoir or closely observed piece of fiction, the book carries a sense of authentic experience that brings it thoroughly alive.

Oliver Storz was born in Mannheim in 1929 and worked as a teacher for a short time before joining the Stuttgarter Zeitung as its arts editor and theatre critic. Three years later he joined the Bavaria film studios as a writer, producer and dramaturge, later also a director. His films won prizes. Much acclaimed was his recent two-part film for television on the Brandt-Guillaume affair.

SchirmerGraf Verlag, with its credo ‘Reading is dreaming with open eyes’, is an independent literary publishing house in Munich. The focus is on contemporary international and German narrative literature, new editions of Modernist classics as well as the writings, diaries and correspondence of artists. Particular care is given to the design of the books. Tanja Graf, formerly senior fiction editor at Piper Verlag, and Lothar Schirmer, publisher also of Schirmer/Mosel Verlag, head the publishing house.