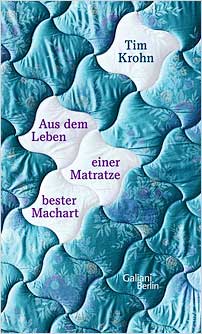 Immanuel Wassermann meets a young girl on a business trip to Ticino in 1935 and marries her the next day. They head back to Berlin, stopping in Schaffhausen for their honeymoon night. Immanuel buys the mattress they sleep on and they return to Berlin, where he risks arrest by the Gestapo. Towards the end of the war, the mattress ends up back in Schaffhausen, now in the ownership of Nora who, on leaving for work, instructs her children to hide under the mattress in the cellar if the sirens go off. When the house is hit by a bomb, the children survive, but their mother does not.

The mattress passes from owner to owner, resurfacing in the possession of a couple at a printing press near Zurich, found by a German tourist sheltering from a storm under a bridge in Rome, then floating in the vicinity of an Italian tourist, who has fallen out of his fishing boat while holidaying in Anzio. Time and again the mattress comes to the protagonists’ aid; helping them to survive, to love … and to sleep.

Much like Jenny Erpenbeck’s Visitation, Krohn’s book ingeniously uses the device of an object with multiple owners to provide an enthralling historical panorama.

Tim Krohn was born in 1965, and is a freelance writer who lives in Zurich. His novel Quatemberkinder (1998) is a cult book in Switzerland; Vrenelis Gaertli stayed at the top of the Swiss bestseller lists for weeks. In 2013, he performed at the two biggest amateur theatre events at the Ballenberg open-air museum and in Einsiedeln. Tim Krohn’s most recent books are the novel Ans Meer and the novella Der Geist am Berg.