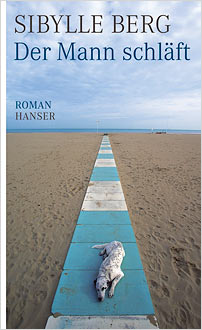 Sibylle Berg’s latest novel combines a cynical attack on the modern world with a deeply sincere love story. The narrator, a forty-something-year-old woman with a history of short affairs with younger men and a job writing instructional leaflets, is relentless in her contempt for the lives of those around her. She rejects the cliché of the perfect marriage. Silver candlesticks, classical music, homemade organic jam, multilingual children and a husband who wears cashmere scarves are not for her. Love is for the mentally defective, a mere marketing ploy for washing powder manufacturers, and men are empty projection surfaces for kitsch ideas. And yet this woman, whose cynicism at times borders on misanthropy, manages, if not to fall in love, then at least to attain a kind of blissful contentment with the sleeping man of the title.

‘The man’, unnamed, because according to the narrator everything we give a name to has a tendency to disappear, weighs 110 kilos, resembles a small mountain range, and plays an important role in both strands of the novel. In the first he is most often an inert sleeping mass whose presence the reader is reminded of intermittently in between the narrator’s tirades and her self-deprecatory descriptions of life before she met him; in the second he has vanished, to become a mere absence.

After four contented years together, the couple go on a holiday to a small Chinese island near Hong Kong. Their relationship comes to an abrupt end when the man disappears one day. The chapters alternate between ‘then’ and ‘today’, between the narrator’s uneventful but serene life with the man in Ticino and her uneventful and lonely life without him on the island. Fulfilment and loss become inseparable from one another; when the narrator thinks she sees the man returning on the ferry in the last line of the novel, a happy ending seems implausible and yet somehow possible.

An expert balancing act between the down-to-earth and the weird and unexpected, kitsch sentimentalism and political correctness are rejected along with realism in this sharply intelligent novel with its trademark sardonic humour. Witty aperçus abound and will have the reader reaching for his or her notebook. There is no writer quite like Sibylle Berg and some translator is going to have great fun with this wicked work of understated love.

Sibylle Berg was born in Weimar in 1962. Alongside her novels and essays, she has also written a number of stage plays which have been performed both in Germany and internationally. Now living in Zurich, she is a regular contributor to Die Zeit and the Neue Zürcher Zeitung. In 2008 she was awarded the Wolfgang Koeppen Prize, an award given by writers to writers.