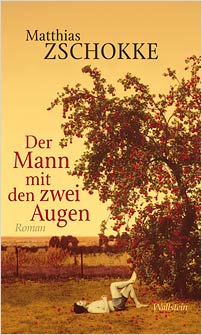 Matthias Zschokke writes about apparently mundane things, revealing them in his elegant prose in an extraordinary new light which manifests their particular beauty and vulnerability. The Man with Two Eyes is an unusual love story with a quirky appeal.

Zschokke rises to the challenge of creating a hero who is instantly forgettable: the man with two eyes simply blends in with his surroundings and people rarely remember him from one meeting to the next. In the big city where he used to live, Zschokke’s protagonist loses everything: the woman with whom he lived, his job, his apartment, his friends and his cat. Following his partner’s suicide at the book’s opening, the man moves to a boarding house in the small town of Harenberg, a place his partner had always held in high esteem – and where he hopes, finally, to be able to sleep. Memories of the past and of his relationship with his partner are juxtaposed with accounts of the man’s encounters in Harenberg. Throughout the book we see the man with two eyes being confronted with the familiar problems of modern life, and observe how he responds to the many little defeats in his life. We see him in public on the streets of the town, at private gatherings, and on his many travels in his professional role as a court reporter, as well as in a romantic context at his partner’s home.

As befits a man characterised as an ‘emotional albino’, his is an understated love affair. The man with two eyes and his late partner are taciturn individuals who lack meaningful contact with fellow human beings. Yet there is a cautiously redemptive turn at the end of the novel when the man decides – for the moment – not to commit suicide, but instead to help out the landlady of a bar in an establishment in a run-down industrial part of town, where he is offered the ‘most remarkable pleasures’.

This is a gentle and quietly humorous book which reveals the surprising complexity of our conception of normality. Although the man’s profession as a court reporter might suggest he would be continually on the trail of scandal, he is in fact much more interested in the ordinary. The Man with Two Eyes consolidates Zschokke’s reputation for good story-telling, astute social observation, and the ability to make the reader marvel at ordinary things.

Matthias Zschokke was born in 1954 in Bern. Since 1980 he has lived in Berlin where he works as an author and film-maker. His debut novel Max, which appeared in 1982, was awarded the Robert Walser Prize. He has published numerous novels, plays, and feature films, and received several renowned prizes including the Gerhart Hauptmann Prize, the Solothurner Literature Prize, and the Prix Femina Étranger for the novel Maurice mit Huhn.