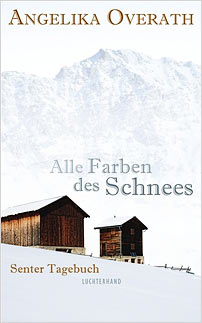 The Many Colours of Snow is a compelling autobiographical diary that spans a full year of the author’s new life in the Swiss mountain village of Sent. The setting, a long valley penetrating deep into the Alps, is astonishingly alien both to the reader and the author; and the sense of isolation is palpable.

Sent itself is a small community relying less on tourism than other parts of Switzerland and more on traditional agriculture, which is still largely done manually and on a very small scale. Its world is regulated by the seasons, which consist mostly of winter, by a close relationship with the natural environment, and by the Romansch community to which Overath has limited access because of the difficulty of this peculiar language. The book revolves around the conditions of this special world and around the thoughts and feelings they generate in a newcomer who seeks to make this special place her home.

There is a subtle forward motion to the text, but the author is also at pains to convey a still, weightless and circular sensation – a pace of life dictated by the conditions in Sent and very different from the urban heart of our civilisation. There are consequently many lyrical descriptions of the surrounding mountains, which never change even though they are also, as Overath observes, always new; of the numerous dog walks, which trace the passing of the seasons; of the seasons themselves, which in the traditional village control the rhythm of life; of the celebration of particularly Sentian holidays, which emphasise the ancient, cyclic traditions of the village’s life. The very structure of the text reveals this feeling of circularity: it ends up where it began, on 1st September, in the snow.

The book’s captivating charm springs from the special nature of this village and region – foreign, seeming to exist outside the modern world. Themes of belonging, roots both old and new, alienation, and the discovery of a new self in a new world loom large in the narrative and will resonate with a wide audience. It becomes an adventure for the reader to explore the strange land of Lower Engadin, the like of which it is hard to imagine existing just a few hours from metropolitan Zurich. It is possible to change your life, this book whispers, and to find a home away from home.

Angelika Overath was born in 1957 and is a reporter, literary critic, and lecturer. She has published two novels and received several awards, including the Egon Erwin Kisch Prize for her journalistic work and, for her literary activities, the Thaddäus Troll Prize. She was awarded the Ernst Willner Prize in the Ingeborg Bachmann Competition for a passage in her novel Flughafenfische.