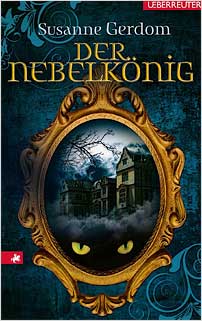 Complex and hugely rewarding, Gerdom’s new fantasy for ages fourteen plus suggests comparison with J K Rowling’s Harry Potter, but stands out from the crowd on its own considerable merits. Menace and violence are tempered with dreams and make-believe to create a highly individual story.

Orphan Sallie is a kitchen maid in a large house that has so many wings and secret passages that she knows only the small part that she inhabits on a day-to-day basis. Her favourite pastime is to listen to the stories of Uhl the Librarian. Sallie gets the chance to leave the confined world of the kitchen and venture further into the house when she has to stand in for one of the serving maids at a party thrown by the Master. This is the first time she has encountered the owners and the world that they live in, and the reader begins to get a sense that all is not quite what it seems. Towards the end of her shift, she witnesses the death of some men playing a card game and encounters the Apothecary for the first time.

When she wakes the next morning Sallie has trouble separating reality from nightmare, but instead of being scolded for being late for her shift she is told to take the rest of the day off. She takes herself off to the cellars where she encounters another strange character, Kepie, a little boy gone mad with living alone. He tells her she is the Cat Queen and drops hints about another world which bears more resemblance to the stories of Uhl than to any reality that she recognises. Eventually, with the assistance of both Uhl and the Apothecary, Sallie realises that the fantasies she is reading about are actually the real world, a world where nothing ages and the common enemy is the Wolf, or Mist King, who threatens to destroy all good in the world if Sallie is unable to defeat him.

Throughout this gripping read, we are treated to fabulous descriptions of a mysterious and strangely confined world, whether it is of the food and drink as it comes to table on the occasion of the grand feast, or of the camaraderie amongst the kitchen staff compared with the threats and viciousness of the Master and his entourage. The writing is wonderfully evocative and the reader is irresistibly drawn into Sallie’s fantastic world as she grows in confidence and understanding of her true role.

Verlag Carl Ueberreuter publishes fiction titles for the age range from seven to young adults. Novels and series for young readers, picture books, as well as fantasy for all ages, are at the heart of this programme. It now publishes adult fantasy with its latest imprint Otherworld.