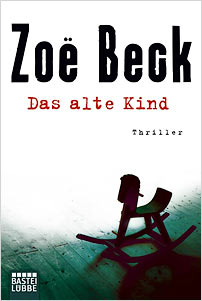 Set largely in Edinburgh and Berlin, between which cities the author herself divides her time, this compelling new thriller will captivate readers with its dizzying twists and turns and richly drawn cast of characters. The local colour of the Edinburgh art scene is both convincing and contemporary, and the author successfully juggles the deliciously far-fetched with the plausible.

Berlin, 1978. Carla goes into hospital with her baby daughter Felicitas, but comes away with a child she is convinced is not her own. Neither her young son nor her husband, the famous concert pianist Frederik Arnim, can confirm her fears and Carla’s life becomes a nightmare. Frederik hires a nanny who soon reports that ‘Felicitas’ is not growing properly. The diagnosis is an extremely rare genetic mutation which causes premature aging and death. Carla, by now undergoing psychiatric treatment, feels even more distant from the child. Frederik takes care of the little girl; for him, her disease is a publicity coup. In time, he divorces Carla, moves to London and remarries. Throughout all of this, their son is almost entirely forgotten …

Edinburgh, 2009. Fiona Hayward wakes in her bath that is red with her own blood. She maintains that someone tried to murder her, but no-one believes her. A few days later, Fiona’s flatmate Mòrag is killed, on her way to a rendezvous which was originally Fiona’s. The plot thickens when Fiona is told her blood group – and forced to realize that she cannot be the child of her alleged father. Reluctantly, he discloses that her mother disappeared for several years after learning that he could not have any children of his own and one day turned up on the doorstep again – with little Fiona in her arms. Ben, a journalist with whom Fiona once had a fling, reluctantly becomes involved in the case, and discovers a possible link to Berlin. And when Fiona enters her year of birth and the place, Berlin, in a search engine, plus the search item “swapped babies”, she lands on the homepage of Carla Arnim, a woman who has been searching for her missing daughter for the past thirty years … Thus the scene is set for a gripping dénouement in which Fiona- Felicitas’s brother – now a doctor with access to dangerous drugs, and with a score to settle with his ‘long-lost’ sister – slinks into the picture and threatens to finish the story once and for all.

Zoë Beck, born in 1975, grew up speaking two languages, and still travels between Great Britain and Germany. The great love of her life apart from literature is music: at the age of three she began playing the piano, winning various competitions soon afterwards and giving numerous concerts. Today she works as a freelance author, journalist and translator – and her very first piano always accompanies her whenever she moves house. In 2010 she was nominated for the Friedrich Glauser Prize in the ‘Best Short Crime Story’ category.