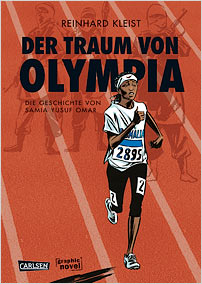 Reinhard Kleist’s latest graphic novel relates a harrowing real-life story, drawing attention to one of the lives behind the all-too-familiar news headlines in which desperate fugitives risk everything to try and enter Europe.

Samia Yusuf Omar is a young Somali woman, a sprinter who dreams of competing at the London 2012 Olympics. She has already participated in the 2008 Peking games, where she came last but still proved her considerable athletic potential. Samia grew up as the oldest of six children in Mogadishu, under the regime of militant Islamic group Al-Shabaab, and since her father’s brutal murder she has been unable to move around freely, let alone train professionally. She lives with her mother and nephews in a state of limbo until she hears of an opportunity to travel to Ethiopia, where conditions are better. Despite her mother’s protests she leaves, only to find that she cannot stay there and that she will have to embark on a much longer and more dangerous journey, via Sudan and Libya towards the coast of Italy. What follows is an endless test of her endurance. One crushing disappointment follows another as the people who arrange the transport ask for more money and it becomes clear that those who deal in promises of freedom are not to be trusted. Samia’s story ends when she drowns off the coast of Malta in April 2012, aged just twenty-one.

Kleist tells this simple, tragic life story in an unflinching, straightforward style, taking advantage of his medium by letting anguished expressions and world-weary gestures as well as renewed bursts of youthful optimism and enthusiasm speak for themselves. His pared-down graphic style, with classic page composition, echoes that of legendary artist Mazzucchelli who created Batman: Year One. Kleist also includes social media elements in his drawings, reflecting the way a young person would naturally relate to the world. He gives a good sense of the resilience of this young woman who tries to bounce back after every disheartening setback, both because she is following her personal dream and because she knows there is no life for her back at home.

Kleist brings Samia’s chilling experiences to a wider audience, concluding with an appeal to honour her as Somalia’s hero – something that she would never have dreamed of calling herself.

Reinhard Kleist was born in 1970 and studied Graphic Arts and Design. He has lived in Berlin since 1996, where he shares his studio with other comic book artists. Kleist’s graphic novel Cash won the prestigious Max und Moritz award and in 2013 he received the German Youth Literature Award for Der Boxer.

Reinhard Kleist was born in 1970 and studied Graphic Arts and Design. He has lived in Berlin since 1996, where he shares his studio with other comic book artists. Kleist’s graphic novel Cash won the prestigious Max und Moritz award and in 2013 he received the German Youth Literature Award for Der Boxer.