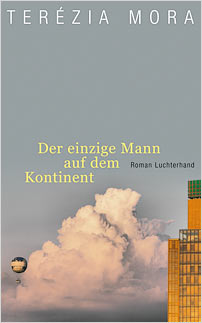 How did such a clumsy teddy bear of a man ever manage to land such a decent job (hailing from East Germany, he had a diploma as an IT professional even before the Wall came down) and marry such a good-looking, intelligent, loving and caring woman? Flora even seems to forgive him his daily excessive indulgence in food and wine and roaming the city’s nightlife until dawn. Likable Darius Kopp often wonders about this. The novel charts a week in his life and his gradual descent into chaos.

An American software’s company only representative on the European continent, Kopp mans an office in the city centre (Berlin?). In fact he doesn’t work much at all and is increasingly at pains to disguise this from his managers abroad and his wife at home. One day a parcel is delivered – it contains a large amount of money owed to the company by a client. Kopp is indecisive about when and how to inform his employer and the hottest summer in years offers distractions aplenty. A week of denial and reckless drinking and feasting ensues. His conscience is uneasy, however, and he has recurring nightmares as the week advances.

When at last he contacts the employer’s offices in London and California, it is to discover the company has merged with another and his services are no longer required. In the course of his week he has also lost Flora: one night, when he returns to the flat, she has left.

A morality tale about life in the modern world this is, then, a story about a man’s frustrating and alienating existence in a global economy that faces collapse and cares little about its workforce. It is a tale of depression and helplessness, but also about recognising what is ultimately important. At the end of the week, Kopp puts all his energy into winning back Flora – but it is more than just that.

It is a hilarious, very human and touching story about someone who will not give in to any modern-day complications that might stand in the way of his happiness, which he regards as his natural right. An immensely entertaining, intelligent, and slightly subversive read by a highly respected author.

Terézia Mora was born in 1971 in Sopron, Hungary. Since 1990 she has lived in Berlin, and is now a noted translator of books from her native language. Her literary debut in 1999, with a collection of short stories entitled Seltsame Materie, was widely praised and won the Open Mike Literature Prize, the Ingeborg Bachmann Prize, and the Adelbertvon- Chamisso Grant. Her debut novel, Alle Tage, published in 2004, was welcomed by critics and readers alike. Her awards for this included the Mara Cassens Prize for the best debut novel of the year, the Berlin Arts Prize and the Leipzig Book Prize.

Luchterhand Literaturverlag was founded by Hermann Luchterhand in 1924 and has been publishing literary titles since 1954, an early and triumphant success being Günter Grass’s novel Die Blechtrommel (The Tin Drum, 1959). In 1997 the firm was voted Publishing House of the Year by the German trade journal Buchmarkt. It is now part of the Random House Group. Authors include Christa Wolf, Ernst Jandl, Pablo Neruda, António Lobo Antunes, Will Self, Frank McCourt, Hanns-Josef Ortheil, and Saša Staniši´c.