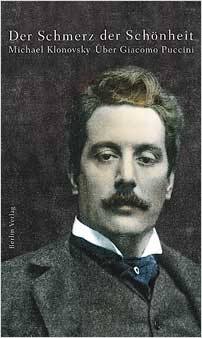 When Puccini died the Italian parliament stood in homage and La Scala was dark for twenty-four hours. So much for the sneers, in so far as they still exist, about ‘a second-class composer’ – sneers which the author of this new study most emphatically does not endorse. His overall view of his subject is clearly stated: Puccini was not ‘progressive’ but used existing musical language in an innovative fashion and continually found new ways of expressing human emotion. He could therefore be regarded as a modernist – even a minimalist. He admired and was admired by both Schönberg and Webern and was a great admirer of Wagner, to whom, in the author’s view, he owed a greater debt than to Verdi.

The author discusses the operas individually, from the two early, unsuccessful ones, through his ‘Sturm und Drang’ period to La Fanciulla del West, and in doing so opens the reader’s eyes to new ideas. For instance, in his section on Tosca, he draws telling parallels between Scarpa and both the SS and Beria, while in Madame Butterfly his study of the clash of cultures is revealing and he again draws parallels, this time with both The Bartered Bride and Tristan and Isolde.

And what of Puccini the man? The book portrays him as a lover of peace and quiet, especially in his home near Lucca, where five generations of his family had been distinguished musicians. But he was no less passionate about women, fast cars, motorboats, shooting, and the persistent harrying of his librettists until they provided him with exactly what he wanted. He had no religion and no interest in politics. This made him naïve about Fascism, which he saw simply as a means of keeping order. He was a depressive when not composing, a perfectionist, and a man who had risen from poverty to great riches. But the author pours scorn on attempts to analyse him psychologically and prove him to have been mentally sick. The book’s title is apt, for Puccini did indeed use the beauty of music to depict the pains of human existence in general and of love in particular, and Michael Klonovsky has produced, for all the composer’s admirers, a stimulating and extremely enjoyable read.

Michael Klonovsky, journalist and author, was born in 1962. His publications include the novels Land der Wunder (Kein und Aber, 2005) and Der Ramses-Code (Aufbau, 2001). He is the Managing Editor of the news magazine Focus and in 1991 was awarded the Wächterpreis des Tagespresse, a coveted prize for investigative journalism. He lives in Munich and is married to a concert pianist.

Berlin Verlag was founded in 1995 as an independent publishing house. It produces literary fiction and quality non-fiction for a wide audience by a select range of international authors. It is also known for its work in fostering promising young German writers such as the now acclaimed Ingo Schulze, Elke Schmitter, Irina Liebmann, Jan Wagner and Gila Lustiger as well as for publishing the plays of Elfriede Jelinek, Nobel prizewinner in 2004. Since 2003, Berlin Verlag has belonged to the Bloomsbury Publishing group. After the successful launch of the children’s books list, Bloomsbury Kinder- & Jugendbücher, in 2003, a new imprint, Bloomsbury Berlin marked the second phase of its development, introduced by the appearance of the British firm’s most famous bestsellers such as The Kite Runner by Khaled Hosseini and Schott’s Original Miscellany.