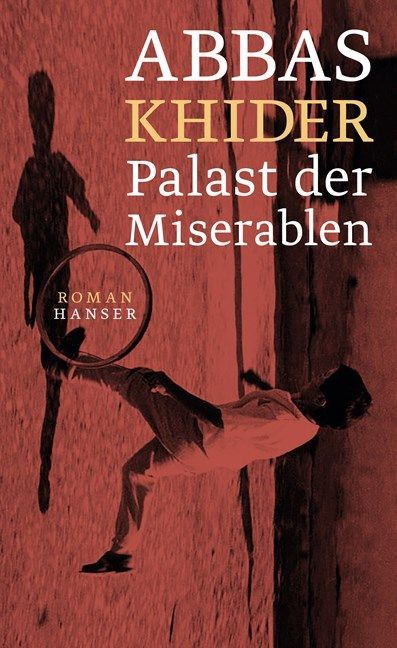 Abbas Khider is a unique and exciting voice on the German literary scene, and his latest novel conjures up a vibrant tableau of life in Iraq during Saddam Hussein’s reign of terror.

The Palace of the Wretched follows the fortunes of its male protagonist, Shams Hussein, as he grows up in the aftermath of the Iran-Iraq War (1980–1988). Shams’ parents move to Baghdad with him and his sister in search of a more peaceful life. Their hopes for a better future are quickly dashed, however, when Shams’ father is unable to find regular work or a place to live. They are forced to move to a new, rapidly expanding slum at the edge of a huge rubbish tip on the outskirts of the city, known as the Tin Quarter.

The family build their own shack and manage to carve out a meagre existence for themselves by mending and selling plastic bags and other rubbish they find on the tip, while Shams’ mother works as a fortune teller. Despite attending school, Shams grows up with little knowledge of the outside world. His life is governed by the unwritten rules of the slums, along with his growing interest in girls. This changes when a road is built from the Tin Quarter to Saddam City.

Over the next few years, Shams takes on a number of different jobs to help support his family, including selling books and working on one of the private bus lines. He discovers a love of literature and starts to write. He also makes new friends and enjoys meeting them secretly to talk about literature and read texts that aren’t available in Iraq. The group calls itself the ‘Palace of the Wretched’. When Shams’ sister is caught up in a financial scandal, he decides to sell banned books in order to help cover her debts. The dire political situation becomes more apparent to Shams in the wake of uprisings and the murder of an important religious figure. The Palace of the Wretched disbands with several members leaving the country. Shams stops selling banned books and concentrates on his university studies, but it is too late. He is arrested in the Tin Quarter and tortured until he admits to selling the banned books.

Abbas Khider’s novel highlights Iraq’s dire social inequalities and the effects of world politics on the country and its inhabitants. Despite this, Shams is an energetic and optimistic hero who never loses his childlike enthusiasm for life.

Listen to translator Simon Pare reading a sample translation from Abbas Khider’s The Palace of the Wretched. This video is available as part of the New Books in German playlist on the Translators Aloud YouTube channel.

Abbas Khider was born in Baghdad in 1973. At the age of nineteen he was arrested for his political activities. After his release, he fled Iraq in 1996 and lived in various countries as an ‘illegal’. He has lived in Germany since 2000 and studied literature and philosophy in Munich and Potsdam. Abbas Khider now lives in Berlin.