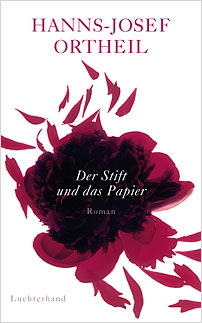 The Pencil and the Paper is the autobiographical story of a young boy who finds his way from muteness to an understanding of language, and from there to an acute and prodigious observation of the world and the people he encounters – all achieved through an immersion in writing.

When a traumatic experience causes Ortheil’s mother to stop speaking for several years, the young boy also turns mute and becomes so introverted that others perceive him to be learning disabled. His father decides to intervene and devises some writing exercises for him, starting with tasks such as describing cloud formations before moving on to short accounts of the day’s activities or snatches of heard dialogue. Ortheil begins to chronicle his daily activities, and as he becomes aware of the possibilities of language and of writing, the whole world starts to open up to him, spurring him on to make tentative contact with others and to participate more fully in the world beyond the home. His father and later his mother continue to encourage him in his efforts, but take a back seat as their son becomes a published writer in adolescence. A fascinating tale of personal discovery and family relationships, The Pencil and the Paper is an engrossing and moving read.

Hanns-Josef Ortheil was born in 1951 and is one of the most important contemporary German authors. He has received many awards for his work, among them the Brandenburg Literature Prize, the Thomas Mann Prize of the City of Lübeck and the Nicolas Born Prize. He teaches creative writing and cultural journalism as a professor at the University of Hildesheim.