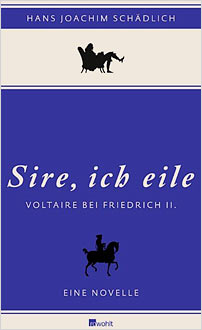 The Philosopher and the King is a two-part novella describing the relationship between Voltaire and Frederick the Great. The first part covers the period up to 1749, and the death of Voltaire’s longtime companion, Émilie du Châtelet – who was largely able to prevent Voltaire from becoming too entangled with Frederick. The second part, covering 1750 to 1754, describes Voltaire’s largely unhappy time at Frederick’s court, and then his attempts to escape.

Schädlich presents Voltaire’s complex relationship with Frederick beautifully. He quotes extensively from letters and other original sources, and there are many stretches where he adds very little embellishment of his own. Nevertheless, the use of passages from very forthright letters, as well as the quick bursts of dialogue, give the novel an intimate feel. Schädlich’s presentation of history is largely at the most personal level.

Schädlich’s telling of a fairly well-known story has considerable appeal. The conflict between the idealistic philosopher and the supposedly enlightened man who, once he becomes leader of a nation, shows himself to be as ruthless in carrying out his will as any monarch, is well presented. The characters and the issues addressed in the novel are compelling and very effectively presented. The critical acclaim heaped on The Philosopher and the King on its publication this spring is testament to the author’s craft and to Schädlich’s status as enduring literary master.

Hans Joachim Schädlich was born in 1935 in Reichenbach, and worked at the German Academy of Sciences in East Berlin before resettling in West Germany in 1977. Schädlich now lives in Berlin once again. He has received many accolades for his work, including the Heinrich Böll Prize, the Hans Sahl Prize, the Kleist Prize the Schiller Memorial Prize, the Lessing Prize, the Bremen Literary Award and the Joseph Breitbach Prize.