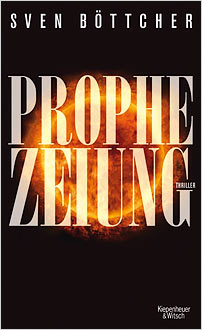 Prophecy is a tour de force. The highly successful co-author of such novels as the 9/11 thriller, Das fünfte Flugzeug, Böttcher weaves together a gripping story from the strands of climate conspiracy theory and hard scientific knowledge.

Concerned with human intervention in an enraged natural world, the novel is divided into four chapters. ‘Prometheus’ sets the scene, the name of a secretly developed computer program that delivers uncannily accurate prognoses about the changing weather. ‘Kassandra’ focuses on the heroine of the novel, scientific researcher and whistleblower Mavie Heller, and her attempt to reveal the secret of Prometheus to the public. The sudden death of a journalist friend in whom she confided her discovery is the starting-gun for a race to warn the world before the conspirators catch up with her. In ‘Pandora’, the warning prophecy of the book’s title begins to come true and the whole planet descends into chaos. The reader is catapulted into a world of severe drought around the equator and permanent monsoon conditions in the northern hemisphere. The algorithms predict hundreds of millions of victims. The clock begins to tick for Heller as leading scientists misuse her findings to plan the detonation of a volcano in Chad with a nuclear warhead in order to throw dust into the stratosphere and shield the planet from cosmic rays.

The final chapter, ‘Styx’, returns Heller to the start of her journey, on the banks of the Elbe in her native Hamburg. Swollen by the incessant rainfall, the tumultuous river is filled with a plague of jellyfish. However, the unexpected appearance of the sun behind the doom-laden rain clouds proves irrefutably that the prognosis is flawed – that man is able neither to predict nor harness nature on a global scale. The book ends with the task of picking up the pieces and re-evaluating our position.

The media, scientists, political strategists, private investors and the energy generators are all criticized for their role in fuelling the catastrophe rather than contributing to an equitable solution for all mankind. Praised by Frank Schätzing, author of the bestselling The Swarm, as ‘intelligent and fast-paced’, and with real potential for transfer to the screen, Prophecy mounts a successful challenge to the widely-held myths surrounding global warming and alternative energy development.

Sven Böttcher was born in 1964 and has been writing novels, non-fiction books and film scripts for twenty-five years. He has also developed successful TV shows. He has written a thriller trilogy about an advertising mogul and a series of philosophical science fiction novels. His four most recent thrillers and works of non-fiction were published under a pseudonym. With The Prophecy he returns to using his real name.