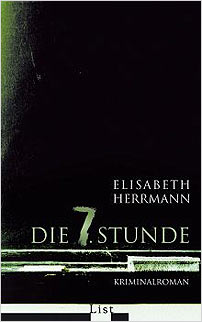 Die siebte Stunde is Elisabeth Herrmann’s second thriller, and a real page-turner to boot. Her first introduced us to Berlin lawyers Joachim Vernau and Marie-Luise Hoffmann, and here they are again, once more drawn into a mysterious chain of events that will require all their cunning and skill to avert the worst.

On the verge of bankruptcy Vernau is tempted by Hoffman into accepting the offer of a teaching post at a private school in the smart suburb of Pankow, managed by her adroit friend Katharina Oettinger. His brief is to take over the supervision of a cutting-edge ‘Teen Court’ experiment, where the pupils themselves decide in mock court hearings how breaches of the school rules should be tried and punished. But thrown in at the deep end he quickly discovers that all is not as it seems, and that his class of teenagers are all petrified by strange events they will not talk about. Clearly the situation is linked to the apparent suicide of Klarissa, a classmate who died at the end of the previous school year, and a bizarre ‘Live Action Role Playing’ game (LARP) that they are all engaged in. Far from mere childhood misdemeanours, it seems that pure evil is afoot. As Vernau’s pupils begin to the singled out and bumped off and the school fails to tackle the obvious threats head-on, he and Hoffmann take frantic steps to isolate the murderer in their midst. Vernau’s probing even sucks him into the world of LARP vampires and the Turkish mafia, thereby adding some surprising insights into modern Berlin’s zeitgeist.

Here is a new crime-writer fairly teeming with originality. How much did you know about Live Action Role Playing before seeing it mentioned in this review? Elizabeth Herrmann is just the person to fill you in. Her narrative style is lively, witty and fluid, her descriptive ability is plain to see, and her choice of a lawyer-duo rather than police detectives as her principal characters enables her to dispense with the sometimes wearisome forensics of the more conventional form. A hit, a very palpable hit, which could leave us all longing for more.

Elisabeth Herrmann born in 1959 in Marburg, is a television journalist and writer who lives and works in Berlin. Her first novel, Mondspaziergänge, was awarded the Frauengeschichten Prize.

Ullstein was founded in Berlin in 1903 by the famous family-owned Ullstein newspaper publishers. The company quickly rose to become Germany's leading book publisher. In 1934 Ullstein was expropriated by the Nazis. In 1952 the house reopened in Frankfurt and seven years later it was sold to the publishing group Axel Springer. In 2003 Ullstein's book division was bought by the Swedish media group Bonnier, who brought Ullstein back to Berlin in 2004. The Ullstein publishing group includes the imprints Ullstein, List, Claassen, Marion von Schröder, Tanja Graf Verlag, Econ, Propyläen and Allegria. The broad spectrum of titles includes bestselling authors such as Jo Nesbo, John le Carré, James Ellroy and Helene Hegemann in fiction; Shlomo Sand, Richard Dawkins, Natascha Kampusch and Timothy Ferris in non-fiction.