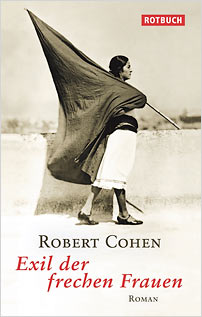 The ‘defiant women’ on whose careers Robert Cohen’s novel is based are three Communists active in the antifascist resistance: the children’s author Ruth Rewald (1906-1942), the journalist Maria Osten (1908-1942; real name: Maria Greßhöner), and the militant, Olga Benario (1908-1942). The action opens in 1928, when Ruth and Maria meet in Café Josty on Potsdamer Platz in Berlin on the same day that Olga has freed her lover and comrade Otto Braun from prison armed with an unloaded pistol. They discuss her defiance (her Frechheit) somewhat enviously, and Ruth suggests founding a society for defiant women with Olga as their coach. This society never assumes a more concrete form, but the theme of women who refuse to play the role expected of them and do instead what they believe to be right is central to the novel. As it progresses, more and more women join the ranks of the freche Frauen: the novelist Anna Seghers, for instance, and the photographers Annemarie Schwarzenbach and Gerda Taro.

As the German title suggests, Das Exil der frechen Frauen follows its defiant protagonists into exile. Olga is sent to Brazil as the bodyguard of Luís Carlos Prestes, the leader of the 1920s tenente rebellion; Maria spends her exile in Moscow and Paris, and Ruth in Paris and Madrid. But their premature deaths (Maria is executed by the Soviets; Olga and Ruth both die in concentration camps) are documented in the very first chapter. As Cohen traces the lives of these women, their relationships, their struggles to survive in exile, their experiences of motherhood, their hopes and ideals, their doubts and their fears, the reader already knows of their ineluctable fates.

This does not mean that Cohen has written so many hagiographies. While the bravery and even heroism of the three women is never in any doubt, the novel focuses too on the more everyday aspects of exile: sitting in trains, standing in queues, filling out forms. The women are often confused, worried about their relationships, uncertain about what it means to be Jewish, or a woman writer, or a Communist.

To appreciate this book there is no need for any particular knowledge of, or interest in, the anti-fascist-resistance. Robert Cohen’s passion for his subject and his fast-moving prose are reward enough in themselves.

‘And the ship with eight sails
And with fifty cannons
Will disappear with me.’

Robert Cohen, born in Zurich, Switzerland, in 1941, has now lived in the United States for more than twenty-five years and teaches German Literature at New York University. Before turning to German studies, he was a student at ‘La femis’, the National Film Academy in Paris. He has directed a formidable number of documentaries, industrial films and commercials, for which he has won many awards. His publications on German literature are also numerous, but this book marks his debut as a novelist.

Rotbuch Verlag is a small independent publishing house founded in Berlin in 1973. After changing hands and locations in the 1990s and at the start of the new millennium, it returned to its home city in 2007. From its beginnings the house published both popular and literary fiction, drama and poetry as well as non-fiction titles with a strong emphasis on the discussion of political issues, often with a leftwing slant. With its new hard-boiled crime label Hard Case Crime Rotbuch has been fostering its foreign crime fiction interests, while also publishing an ambitious selection of German language crime novels. Its authors include Birgit Vanderbeke, Heiner Müller, Hannah Arendt, Franz Xaver Kroetz, Mickey Spillane, Jerome Charyn, Peter Weiss, Gunter Gerlach and Nobel Prize winner Dario Fo.