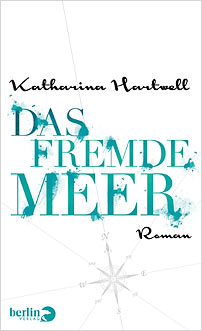 Katharina Hartwell is a thoughtful and ambitious writer with a gift for story-telling. Her deftly written first novel is a pleasingly original tale with a potentially tragic love story at its heart that slips from a recognisable present into an imaginative realm.

Marie is an unusually worried child with the exception of some early childhood years spent at her grandparents’ home with its large, wild garden and the woods beyond. There she was a fearless leader in the games with local children, urging them to climb trees to the top and make the most of their freedom. When the family moves back to the city Marie finds it difficult to make friends. She falls into a solitary bookish existence and resigns herself to the fact that a quiet academic life may be the one for her. Fearful of change and anything unpredictable, Marie convinces herself that it is possible to avoid catastrophe and disaster just by expecting those things.

But when Marie falls deeply in love with Jan, a photography student, she discovers that she simply cannot prepare herself for every eventuality. One evening Jan is knocked off his bike by a car. He is seriously injured and falls into a coma. Marie struggles to find a way to encourage him back to life until her imagination comes into its own, weaving stories just for him in which he will recognise the two of them as characters and which always end with the promise of reunion and salvation. These stories are a rich mix of science fiction and fairytale: the princess rescuing the prince, the beautiful tarot card reader rescuing the ‘ghost-boy’ from the circus, the mysterious stranger in the belly of the ship that delivers souls to the land of the dead who rescues those she feels do not belong there. The sea in The Strange Sea comes to symbolise life itself, its capricious nature and the challenge of navigating it intact. Each tale features a heroine whose name begins with ‘M’ and a young man whose name begins with ‘J’ or ‘Y’, and each one shares a narrative of separation followed by an eventual reunion. The reader does not realise until the end of the novel what role these made-up stories play in the ‘real’ story of Marie and Jan.

The Strange Sea exhibits a skilfully light touch and a delightfully rich vocabulary which guarantees a diverting reading experience.

Katharina Hartwell was born in Cologne in 1984 and read English and American Studies, graduating with distinction. A student at the Leipzig Institute for Literature since 2010, she published a collection of short stories, Im Eisluftballon (‘In the Frozen-Air Balloon’). Katharina Hartwell has won numerous writer’s grants and prizes.

Berlin Verlag was founded in 1994 as an independent publishing house and publishes approximately forty titles per year. The list combines international and German literary fiction and a non-fiction program. Several young German authors have made a successful publishing debut with Berlin Verlag, and many authors are internationally renowned prize-winners. Berlin Verlag has been part of the Bonnier Group since 2012.