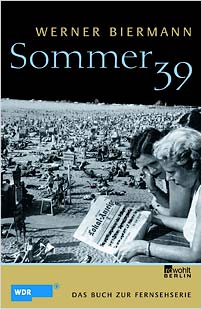 This latest publication by the historian and film-maker Werner Biermann is a brilliantly written, very well researched book in which the author paints a detailed picture of the months leading up to the outbreak of the Second World War. To do so he adopts the unusual but effective device of telling his story through the eyes of a number of people, from the well-known to the quite unknown, some of whom helped to instigate the conflict and all of whom were affected by it.

The book’s seven chapters have another peculiarity: they are written like a diary, with certain dates chosen to inform the reader what different characters were doing at a particular moment in time. Among the many personalities referred to are the writers Thomas Mann, Bertolt Brecht, Albert Camus and Ernest Hemingway, with Einstein and Freud holding the balance for science as well as books. Both Hitler himself (of course) and Goebbels make their appearances, and alongside them we encounter the young Jack Kennedy, then a young man at college researching for his dissertation.

Among other personalities who feature are Marlene Dietrich, who famously sang for the American troops, Georg Eisler, whose attempted assassination of the Führer so nearly succeeded, and had it done so might well have prevented the outbreak of the war itself, and that heroic but now little remembered couple Anneliese and André Hoevel, who died for their beliefs. High in the ranks of the villains is Bruno Tesch, the main distributor of cyclone B, the poison gas used in the death camps.

The beginnings of what were to lead to organised euthanasia, the atom bomb and the Holocaust make particularly interesting reading, and the book as a whole succeeds in a masterly way in linking everyday events with the decisions being hammered out by the leaders of the world in Berlin, Paris, Warsaw, New York and Moscow. What causes wars? Is it just greed and madness? And who suffers from wars? The innocent and the guilty alike? Biermann takes his readers through the months which in due course affected countless millions of lives and changed Europe and the world forever.

Werner Biermann was born in 1945 and is both a writer and a film-maker. In 1972-73 he was a reporter with the news magazine Stern and has been a freelance writer since then. He has made around fifty documentary films, most of them dealing with historical themes, the most recent being Der Erste Weltkrieg – Alptraum Verdun (‘The First World War – the Nightmare of Verdun’) in 2004. He has been awarded various prizes, among them the coveted Adolf Grimme Prize for excellence in television work.