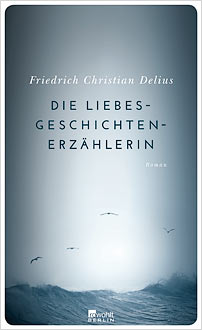 The eponymous teller of love stories is fifty-year-old Marie von Schabow who is trying to decide which story to focus on for her next novel: the affair between the Dutch King William I and a Berlin dancer; the life, love and marriage of her father, Hans von Schabow; or her own life and love affair with her husband, Rheinhard. The love stories of the title thus encompass a range of different sorts of love.

The book is set during the late 1960s and its historical context is carefully pinpointed. The novel spans Marie’s father’s action during the First World War, her own involvement with the Hitler Youth movement in the ‘30s and her marriage to Rheinhard during the Second World War, her experience in East Germany of occupation by the Russians and her eventual move to Frankfurt. There is a huge amount in this deceptively short novel which does not linger over distressing historical events and yet leaves us in no doubt about the terrible toll they exact on the individuals caught up in them.

The fascinating historical subject matter, filtered through the eyes of the narrator, make this an intensely personal and moving account of suffering, endurance and love across generations.