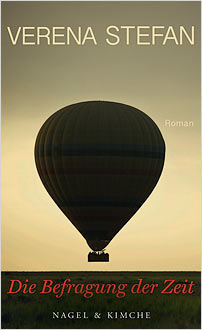 Verena Stefan is known first and foremost for her seminal 1975 narrative Shedding, which is recognised as a pioneering work of modern feminist literature. Her latest novel is set in rural Switzerland in 1949.

Ageing village doctor Julius Brunner has been serving his community for decades, treating ailments, delivering children and – when called upon to do so – carrying out abortions. When the young and unmarried Beatrice discovers that she is pregnant, she comes to Brunner in despair. Within a few days rumours begin to circulate, and she is soon denounced to the police. Brunner is arrested, charged with conducting abortions for commercial ends, and committed to a mental institution in Bern.

The narrative is anchored in the few months of his internment, but spans his entire life. The novel’s structure is based on a test at the clinic in which Brunner is asked to state his associations with a series of terms in order to explore his subconscious. Within the seconds he takes to reply, time is suspended as his mind wanders freely.

Stylistically, The Test of Time follows the trend towards experimental feminist fiction, exemplified by this year’s winner of the Baileys Prize, Eimear McBride’s A Girl is a Half-Formed Thing. It is poetic yet radical, provocative and authentic, and takes an unsentimental and non-judgemental approach to this controversial subject.

Verena Stefan was born in 1947 in Bern, Switzerland. She initially trained as a physiotherapist and studied sociology and comparative religions in Berlin. In 1972 she co-founded the feminist group ‘Brot und Rosen’, before publishing her seminal work Häutungen (Shedding) in 1975, which brought her international acclaim and became a cult text within the feminist movement. Stefan has won numerous literary awards and now lives in Montreal, Canada.

Nagel & Kimche was founded in 1983 and quickly established itself as one of Switzerland’s leading publishers. Emphasis is placed on the work of contemporary Swiss authors. In 1998 Nagel & Kimche joined the Hanser group of publishers.