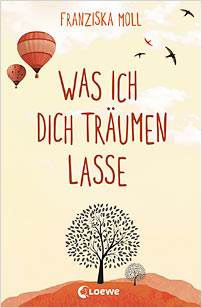 Teenage girls will be queuing up to read Franziska Moll’s fantastic debut! The engaging characters immediately draw readers into this engrossing, moving and uplifting novel.

Rico and Elena are four months away from taking their end of school exams, deeply in love and about to celebrate their first anniversary as a couple. Then Rico is hit by a lorry as they leave school one day and, although visibly unharmed, he sustains internal injuries and falls into a deep coma. Along with Rico’s family, Elena tries to identify the things that will keep the comatose Rico in touch with his old life and help to bring him back, surrounding him with the music, books and sounds that once meant so much to him. But Rico remains totally unresponsive. Elena tries to comprehend what Rico is experiencing by imagining the feeling of being in a coma and then trying to get her body to stop functioning, but finds herself incapable of not moving. She tells him enough is enough, they’ve learned their lessons but now it’s time to wake up. Elena visits the hospital daily and talks about the history of their relationship: Rico was always the more positive, forwardlooking and contented half of the couple, while she has played a cooler, more cautious role. Yet both of them have always been thoroughly committed to one another and happy to be together.

Then Elena finds a list on Rico’s computer entitled ‘10 Things I Must Do Before I Die (with Elena, of course)’. With the encouragement and help of Rico’s heavily tattooed and pierced care-worker, Tim, Elena sets to work achieving Rico’s targets on his behalf. Gradually Elena starts to come to terms with Rico’s physical deterioration and her own loss, until she is ultimately able to explain to him the reasons for her more withdrawn and private approach to life, including the top ten things he doesn’t know about her.

In its relaxed, colloquial style, Moll’s story moves back and forth between the present – Rico’s coma and the reactions of all those who are left behind supporting him in hospital – and the past twelve months when the relationship between Rico and Elena was established and developed. Its universal themes of first love and loss, coupled with the quality of its storytelling and lightness of touch, mean that The Things I Dream For You is sure to appeal to English-speaking readers.

Franziska Moll’s real name is Sabine Both, and she lives with her twin daughters in an idyllic little village near Cologne. After working with drug-dependent young people, she discovered that she could write. She studied at the International Film School to learn everything she needed to know about good scriptwriting and went on to write sitcoms and ideas for films. However, it was only when she decided to concentrate on writing novels that she found her dream profession. The inspiration for Was ich dich träumen lasse came from her own experience, and it has helped strengthen her hope that each time fate deals a blow, something good can come out of it.

Loewe Verlag was founded on June 8, 1863 by the Leipzig bookseller Friedrich Loewe. Since its beginning, children’s and young adult books have had their place in the programme and then became the focus in 1876, when Friedrich Loewe began to specialise in juvenilia, fairy tales, classics and picture books. Since 1965, Volker Gondrom has been the head of Loewe; he gave the publishing house the face it has today. Under his leadership, Loewe has developed into one of the largest and most successful publishing houses for children’s and young adult books in the German-language market.