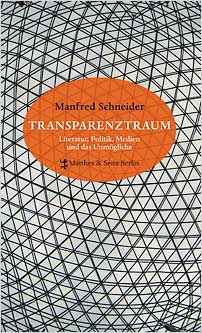 We are living in an age of transparency. Individuals are happy to disclose once-private aspects of their lives online; we can look at each other’s homes on the internet; transparency in industry is considered essential; government surveillance is taking place on an unprecedented scale and WikiLeaks has turned the idea of transparency into a political philosophy. In The Transparency Dream, Manfred Schneider reflects intelligently on the profound significance of the concept of transparency in contemporary life.

Hundreds of years ago, mankind dreamed of a time when there would be complete transparency. Schneider traces the origins and development of this dream to find out what has happened to it in the present day. He starts with the etymology of the word ‘transparent’ then discusses the first philosophers who saw meaning in dreams. He goes on to discuss related ideas throughout history, such as the illness known as ‘glass delirium’ that made people feel as though they were made of glass or had a window in their body; Rousseau’s ideas about language and truth; the French Revolution and ‘the terror of transparency’; the popularity of glass architecture during the 19th century; psychoanalysis and the idea that our dreams reveal our innermost thoughts; the Surrealist movement and, finally, the technology behind the latest developments in brain scans. Schneider then looks at how the idea of transparency has been expropriated by science, government institutions and whistle-blowers. He concludes that while nowadays people are more visible than ever before, they are still not transparent and emphasises that just because we can see through things does not mean that we understand them.

Schneider’s highly original book successfully straddles the gap between popular non-fiction and academic writing. His discussion of modern-day ideas of transparency includes sections on WikiLeaks, Google Earth, Facebook and reality TV, while the chapters that deal with philosophy cover more challenging ground, but are by no means inaccessible to the educated reader. The stories of different philosophical and cultural movements are recounted in an engaging manner and illustrated with a wealth of quotations, drawings, diagrams and photographs. With its broad subject matter and universal ideas, this unusual and refreshing book is likely to appeal to an international readership. The Transparency Dream is a great read with lively narration and a balanced and accessible style.