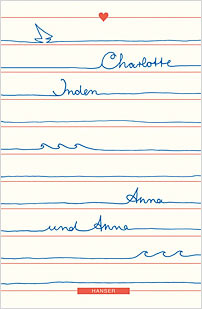 The Two Annas is a conversation in letters between a grandmother and her granddaughter, as well as between an elderly lady and her long-lost love, and between a young girl and her first love. It is an affecting reflection on life and love, family and relationships, loss and happiness.

Anna and her grandmother Anna have a special relationship; their bond is closer and more intimate than their respective mother-daughter relationships. Granddaughter Anna has lost her best friend Jan who has moved to Amsterdam with his mother. Grandmother Anna has lost one of her legs. Encouraged by her granddaughter, she gets in touch with the man she was in love with fifty years ago, Henri. Anna and Anna write letters to each other, and to Jan and Henri. There are letters to a leg, to Father Christmas and to their family. Through these letters we get to know and like Anna and Anna over the course of two or three years – Anna is twelve when we meet her and fifteen at the end of the book. We witness the ups and downs of first love as well as the joys of finding love in old age. Both Annas are warm, funny and sensitive; they share a sense of humour and a fondness for wicked pirates.

Grandmother Anna goes on a world trip with Henri. Anna and Jan meet and share first kisses although the distance between the two countries and their teenage insecurities keep them apart. When Grandmother Anna dies it comes as a tremendous shock for both her granddaughter and the reader. Granddaughter Anna starts to write first, tentative letters to Henri, while Jan provides her with a shoulder to cry on.

The Two Annas is an absolute treat to read. Readers of all ages will delight in becoming acquainted with the two Annas through the letters they write as well as through the ones they receive. The young Anna writes lovely letters for her age: playful yet also very insightful and down-to earth – qualities which are reflected in her grandmother’s thoughtful replies. Their letters are full of love and joie de vivre and discuss subjects which readers can readily relate to. The novel’s epistolary presentation of the relationship between granddaughter and her grandmother is perfectly executed while its exquisite design is a feast for the eyes: no ebook could do this beautifully produced volume justice.

Charlotte Inden was born in 1979. She read German, history of art, and cinema and television studies in Marburg, London and Strasbourg. She lives in Karlsruhe with her husband, working as an editor for a daily newspaper. Her message to the world is: write more letters!