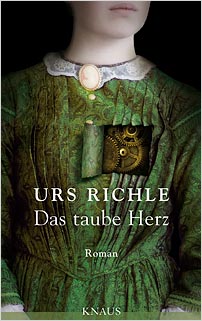 This novel is a wonderful mix of historical fiction and literary experimentation, with a plot that is compelling throughout. At his best when working with the picaresque, Richle’s engaging and evocative descriptions will captivate readers old and new.

We are thrust into the disturbed world of antique-clock collector Albert Geraux. His pride and joy – a priceless piece by Jean-Louis Sovary – has been taken, and it was made from the bones of Sovary’s tragic lover Anna de la Tour.

We then reach back to Sovary – our protagonist – as a young boy. Insatiably curious about the workings of clocks and other mechanisms, Sovary is forever aggravating his father with his outlandish experiments. Later, a low-level clock-restorer employs him as an assistant and launches an ambitious plan to counterfeit famous clocks, with Savory the talent behind the operation. This scam is discovered by a Paris organ-manufacturer, Montalier, who uses Sovary for his own purposes, forcing him to work on a chess machine which can beat all others. Sovary soon strikes up a friendship with fellow captive, Anna de la Tour, whom Montalier has kidnapped from an asylum. Scorned by society and referred to by Montalier as ‘the beast’, de la Tour is a precocious chess genius. Her coruscating intellect combines with Sovary’s mechanical skill and together they hatch a plan to outwit Montalier, ultimately escaping from his clutches. Montalier’s plan soon pits the full might of Marie-Antoinette’s French court against that of the Austro- Hungarian Empire.

Sovary and de la Tour do ultimately manage to flee, but true to the novel’s veneer of the tragic, they are never reconciled. Instead, Sovary must discover his lover’s fate from a Parisian clairvoyant many years later, reclaiming her bones from an obscure occult sect who had ritually murdered her.

Alongside this highly personal and evocative narrative, the novel also relates the story of the clock-making trade’s development, and Richle excels in his technical and mechanical descriptions, which regularly border on the lyrical. At its core The Unbeating Heart is an allegory of man’s desire to create a thinking machine, reflecting some of the main concerns of the Romantics. This novel will appeal to readers looking for both first-class entertainment and an original take on a fascinating period of European history.

Urs Richle, born in 1965, studied Media Engineering and has published a number of award-winning novels that have been translated into several languages. Apart from writing, Urs Richle also works on research projects at the University of Geneva and as a lecturer at the Swiss Literature Institute in Biel.

Albrecht Knaus Verlag was founded in 1978 by Albrecht Knaus and the Bertelsmann group. Its list is liberal and broad, and aims to be both entertaining and informative, linked to the present while remaining aware of the past. Knaus has recently added non-fiction titles to its catalogue. Authors include Irène Némirovsky, Peter Ackroyd, Aleksandar Hemon, and John Burnside.