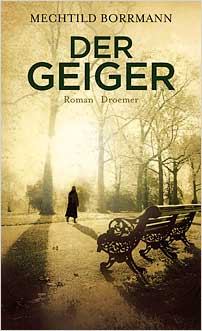 Mechtild Borrmann’s credentials as an accomplished writer of crime fiction are comprehensively showcased in her latest historical thriller. The Violinist is an upmarket page-turner which provides chilling insights into the enduring culture of violence at the heart of Russian society.

The story begins in Moscow in 1948 when the talented violinist, Ilja Grenko, is arrested immediately after a concert. Grenko was due to undertake a concert tour to Vienna and had applied to take his family with him, which leads to his being suspected of attempted desertion. His Stradivarius violin, a priceless piece of family heritage and a gift from the Tsar, is confiscated. Grenko is interrogated and tortured by a brutal KGB agent and forced to sign a false confession in exchange for his wife and children being spared. He is then sentenced to twenty years of hard labour in the mines of Wortuka. His wife is not told that he has been arrested, but is informed that he has left the country and deserted her. She refuses to accept this version of events, and consequently she and the children are deported to a labour camp.

Sixty years later, in Cologne 2008, Ilja Grenko’s grandson Sascha receives a phone call from his long-lost sister, Viktoria, asking him for help. They arrange to meet, and Sascha arrives at the bar where his sister works. But before Sascha can speak to her, Viktoria is shot dead. Sascha flees, but still has the note she left for him and a key to a locker at Munich train station. There he finds a bag containing documents detailing his family’s attempts to recover the Stradivarius instrument. His search for his sister’s murderer becomes a long chase leading to the source of his family’s tragedy, as Sascha unravels a complex web of intrigue and betrayal involving Russian gangsters, illegal arms trading and a corrupt KGB officer. He tracks the origins of his grandfather’s betrayal to his violin tutor, a certain Professor Meschenow. The professor was so profoundly jealous of his student’s success and of his exquisite violin that he reported to the KGB that Grenko was planning to defect, never anticipating the extent of the cruel consequences for his whole family.

The Grenko family are vividly brought to life in a remarkable historical setting which gives rise to the intricately woven plot. This is a striking, brilliantly composed thriller which will find a ready-made English-language readership.

Mechtild Borrmann is the author of the award-winning bestseller Wer das Schweigen bricht, which won the 2012 German Prize for the Best Crime Novel. A freelance writer, she lives in Bielefeld.