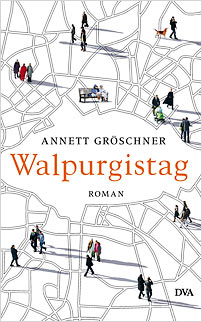 The book documents twenty-four hours in the life of Berlin on Walpurgis Night (the Witches’ Sabbath featured in Goethe’s Faust). Each of the chapters is a story in miniature; they follow a diverse set of characters, revisiting them at different points of the day, while their paths cross at various points. These precisely-narrated vignettes slowly interweave and reveal the connections and coincidences which constitute life in the city. A woman discovers that she is pregnant as the result of an affair; a young boy runs away from his alcoholic mother; a woman is found with total amnesia and signs of having been attacked; an old lady moves out of the house that holds all her memories. Towards midnight, the strands begin to tie up: the woman with amnesia turns out to be the barmaid attacked in one of the earliest chapters; and a woman who has been stealing ID cards to hide her own identity encounters the woman whose identity she currently possesses.

But this isn’t simply a social history, nor only focused on everyday minutiae: there is the touch of the surreal in the man who commits suicide by cryogenically freezing himself; in the scurrilous descriptions of a young girl working for a chat-line which specialises in Turkish women; and in a satire on apparently socially-aware performance art. Suspense is built up through the fragmentary structure which creates tension as we switch from one strand to the next, not knowing what is going to happen. Gröschner’s writing style is based on careful observation, reported in a dry, witty way and full of never-superfluous detail. The sheer range of characters is striking: the sixty-year old vagrant with dreadlocks and a murky past in the GDR; the Romanian weightlifter without proper papers; the three tough-talking, wise-cracking old biddies with their dog Stalin; and the marauding trio of young Turkish-Kurdish schoolgirls who go by the misleadingly sweet nicknames of Sugar, Cakes and Candy.

Gröschner again successfully captures the diversity, chaos, history and low-key anarchy of life in contemporary Berlin. The Witches’ Sabbath stands out as a novel of kaleidoscopic range and epic scope.

Annett Gröschner was born in 1964 and studied German language and literature. She has won many awards for her fiction, including the Anna Seghers Scholarship of the Berlin Academy of Arts and the Erwin Strittmatter Prize of the state of Brandenburg. Gröschner also writes documentary literature and plays, and works as a journalist for various daily and weekly newspapers and radio. She has been teaching at the Hildesheim Institute of Literary Writing and Literature Science since 2005. 2000 saw the publication of her best-selling novel Moskauer Eis (‘Moscow Ice’).

Deutsche Verlags-Anstalt has an outstanding reputation as one of Germany’s leading non-fiction publishers, with an emphasis on history, memoirs, biography and current affairs. The firm also has an exquisite list of literary fiction. Among the bestselling authors are Marcel Reich-Ranicki, Sebastian Haffner, Martin Doerry, Ian Kershaw, Anne Enright, and David Wroblewski. Deutsche Verlags-Anstalt has been a part of Verlagsgruppe Random House since 2006.