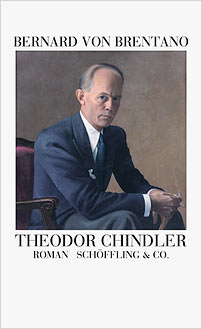 Bernard von Brentano’s debut novel follows a German family grappling with both personal and political turmoil during the First World War. The book was written in Switzerland in 1936 after Brentano was forced to leave his job as a correspondent at the Frankfurter Zeitung and go into exile due to his political convictions. It was first released in Switzerland, but was eventually published in 1951 in Wiesbaden, two years after he moved back to Germany. Following a month-long literary festival in Wiesbaden in celebration of Brentano and to mark the fiftieth anniversary of his death, Theodor Chindler has been republished by Schöffling & Co. as the culmination of a revival of his popularity in Germany.

The middle-class Chindlers are a respectable, church-going family presided over by Theodor Chindler, a member of parliament for the Catholic Centre Party who works in the Reichstag in Berlin. The patriarchal Theodor initially believes that politics can be left at the door and that his place at the head of the family cannot be challenged, but then cracks start to appear in his once harmonious household. Political opinion at home becomes divided, and when daughter Maggie joins the workers’ movement against his wishes and son Leopold falls in love with a male classmate, life as they know it changes irrevocably. Disaster descends, and only one member of the family emerges triumphant: but at what price?

Theodor is a highly religious man, but also extremely ambitious. He believes in the power of Catholicism to save Germany and is staunchly opposed to the war and those in power. Longing for order and peace at home, he finds himself in constant disputes with his dissenting daughter and his wife Elisabeth, who wishes to blank out the horrors of war, as well as the idea that those in power can be challenged. Elisabeth married Theodor in her youth to escape her father’s alcoholism and is now permanently installed in their villa in Neustadt, vaguely in mourning for her own ambitions in life, which she had to put aside for her husband’s own career. A matriarch in the purest sense of the word, she loves her children greatly, but uses this as justification for surveying every aspect of their lives. She pushes them further and further away from her through her hysterical outbursts and preoccupation with saving face.

Theodor and Elisabeth have well-meaning intentions, but their preoccupations have caused a rift between them and their children. When their son Ernst comes home from the war for a brief visit, Elisabeth hounds him as to when he will see his wife Lilli again and forbids him to talk about the war; and Theodor himself is more concerned with getting information about the commanding ranks on the frontline for his own gain in parliament than he is with welcoming his son home. Ernst, exhausted and much changed from his time at war, is disappointed and exasperated by his father’s politic nature and disregard for his son’s liability to get shot should any information reach parliament through him.

Ernst is not the only Chindler sibling who goes through a transformation in the book. Maggie longs to escape from her parents and the family home, much as her own mother did when she was young. When she falls for socialist revolutionary Caspar Koch she enters unknown and dangerous territory, also realising that leaving the family home for a man doesn’t lead to freedom. She ends up in jail for a time, but finds prison not much different from being at home, telling Elisabeth when she visits that she acts more like a policeman or judge than a mother. Leopold finds himself captivated by romantic genius and close friend Balthasar Vierling, whose passionate affections he tries to fend off for fear of scandal while simultaneously not being able to bear being without him. Karl, the other Chindler brother at war, has conversely fully adopted his parents’ cool sobriety, writes of the necessity of sacrifice in his letters home – which worries Theodor greatly – and openly says that he finds his sister’s arrest an annoying embarrassment that could jeopardise his prospect of getting engaged.

Brentano’s close familial ties to the political stage of the time afforded him a unique insight into Germany’s transition between the Weimar Republic and the National Socialist government. The writer and critic Oskar Jancke praised Brentano’s writing style for being ‘concise and hard, sober and precise, tender and mysterious, but always restrained’ rather than musical, yet not without a ‘sharp, ironic and melancholic’ undercurrent. There is certainly an effortless control and a persuasive touch to Brentano’s highly readable prose. The book has often been compared to Heinrich Mann’s works Man of Straw and The Blue Angel and secured Brentano deep admiration from contemporaries including Bertolt Brecht (who recommended it to Walter Benjamin) and Thomas Mann.

Bernard von Brentano tells the story of backroom politics and the wretched deaths in the trenches, but the book is ultimately an engrossing family saga set in times of social upheaval. Theodor Chindler is a bittersweet snapshot in time that remains potent to this day.

The second volume of Bernard von Brentano’s series ‘The Story of a German Family’, Franziska Scheler (1945), will be published by Schöffling & Co. in 2015.

Bernard von Brentano (1901-1964) was born in Offenbach, Germany. During the 1920s he was a correspondent for the Frankfurter Zeitung in Berlin. His essays ‘Über den Ernst des Lebens’ (‘About the Seriousness of Life’, 1929) and ‘Der Beginn der Barbarei in Deutschland’ (‘The Beginning of Barbarism in Germany’, 1932) antagonised the National Socialists resulting in all of Brentano’s books being burned when they came to power. In 1933 he emigrated to Switzerland, where he worked for several renowned newspapers including the Neue Zürcher Zeitung. In 1949 he returned to Germany and lived in Wiesbaden until his death in 1964.