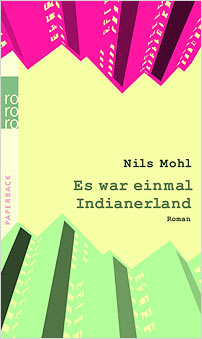 Colloquial in style and highly inventive in structure, Mohl’s new novel will readily appeal to a young adult audience immersed in cinematic culture. The overall impression, strengthened by a narrative style which frequently lists visual features using sentence fragments, is that the reader is watching a DVD, selecting scenes at random and then piecing the sequence together.

The narrator is a seventeen-year-old boy living in a poor suburban area. His story follows a pattern of illegal parties and out-of-town festivals, failed attempts to chat up the posh girls, being stood up, and finding someone who genuinely cares for him. At the same time, an important thread of suspense is provided by the mystery surrounding the identity of a man in the block of flats where the narrator lives, who has murdered his wife and goes on the run. The details are not revealed until very late in the novel, when the man turns out to be the narrator’s father.

One of the most striking features of the book is the way that particular objects are used to create points of consistency through the jumbled chronology, turning the reader into something of a detective. This is a highly original novel that stands out clearly from others in the genre.

Nils Mohl was born in 1971 in Hamburg. He studied Literature and Linguistics in Kiel, Tübingen und Berlin, and now lectures in Creative Writing at Hamburg University. He belongs to the Forum of Hamburg Authors and has twice won the MDR Literature Competition and the Hamburg Literature Prize.

Rowohlt Verlag was founded in 1908 by Ernst Rowohlt. This publishing house with its various divisions is part of the Holtzbrinck group. Rowohlt publishes literary fiction, non-fiction and children’s books. Authors include Elfriede Jelinek, Daniel Kehlmann, Imre Kertész, and Martin Walser.