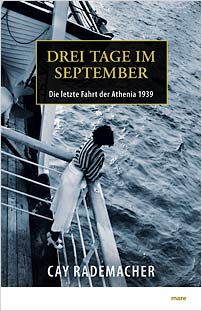 The sinking of the British passenger ship Athenia by a German U-boat on the first day of the Second World War is a historical fact. The boat was carrying 1,102 passengers and 315 crew: ninety-three passengers and nineteen crew died. The Athenia left for the open sea from Glasgow on 2 September 1939. On the morning of 3 September war was declared. At 7.38 p.m. (GMT) the torpedo hit the liner.

Drei Tage im September is an account of this incident with all its political implications. U-Boot Captain Fritz-Julius Lemp had contravened the Hague Convention by attacking an unarmed passenger ship without allowing its passengers sufficient time to escape. To aggravate the situation still further, some of the victims were US citizens and as the US had been drawn into the First World War by the disastrous sinking by the Germans of the Lusitania, the stakes were now higher still. Ships – British destroyers, a Swedish millionaire’s yacht and a Norwegian vessel – hurried to the aid of the slowly sinking liner. Captain Lemp concealed information about the attack (with the connivance of his seniors), but later, after abandoning U-boat 110, failed to scuttle it, leaving behind an Enigma code machine that was to help the British code-breakers in their decisive work later on.

Rademacher brilliantly depicts the tensions of that August and September. Personal stories of a number of the passengers, many of whom were fleeing from Europe and Hitler, are intertwined with a description of Lemp himself and of the wider strategy of the German U-boat fleet under Admirals Raeder and Doenitz, considered then the only arm of the German forces that could threaten Britain’s lifeblood of imports and exports. Further details of the political manoeuvres devised by Hitler and Ribbentrop, and the strategic placing of Nazi supply ships and U-boats in the Atlantic, are interspersed with the booking of passages on the Athenia and the preparations on board. The dividing of a large swathe of the narrative into the three days in question provides a satisfying structure for a narrative full of personal drama at sea and political drama on dry land.

A masterly interweaving of the political, the strategic and the personal from a skilled and practised hand.

Cay Rademacher, born in Flensburg in 1965, studied Anglo-American history, ancient history and philosophy in Cologne and Washington D.C. He worked as a journalist for many years with publications such as GEO, mare, DIE ZEIT, Merian and the Süddeutsche Magazin. He is also the author of several works of non-fiction and historical novels. In 2004 he became the managing editor of GEO Epoche. He lives with his family in Hamburg.

mareverlag publishes around twenty titles a year, both fiction and nonfiction, and all with some connection with the sea, whether in its concrete, symbolic, metaphorical, historical or ecologically significant guise. The same spirit of fascination, respect, and longing evoked by the sea that is prevalent in the prizewinning magazine mare (founded in 1997 and voted best magazine of Germany in 2001) and the television channel mare TV (launched in 2000) now finds expression in the medium of the book with publisher Nikolaus Gelpke at the helm.