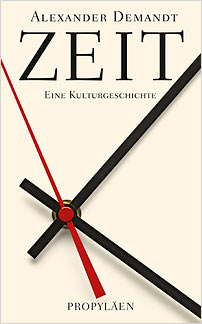 Alexander Demandt’s latest work is a thought-provoking and meticulously researched analysis of the concept of time which readers will enjoy savouring and coming back to.

Each chapter of the book deals with a different aspect of time, including days and hours in ancient times, the four seasons and time concepts and metaphors. The chapters are then all subdivided into twenty-six sections, each designated by a letter of the alphabet and exploring one particular aspect in greater detail. Time begins from a philosophical perspective, by considering the etymology of the word ‘time’ as well as the difficulty of defining time as the basic property of everything that occurs. Demandt discusses ideas such as the space-time continuum, cyclicality and linearity before going on to look at symbols of time, including the way that the Greeks and Romans depicted complex and abstract concepts as people. He also covers the ways in which different units of time – days and hours, the week, months and years – were treated in a range of eras and civilisations. Demandt’s research is supported by references to an impressive canon of ancient works.

The concept and facets of time are examined with an astounding level of detail and breadth of knowledge. Some of the book’s more unusual sections deal with topics such as the body clock – using one’s shadow to tell the time – and birds as indicators of time: roosters, Ausonius’ swallows and Romeo’s lark. While there is some focus on the way in which time features within the German language, the author considers the way in which temporal concepts feature in a wide range of modern and ancient languages. World religions are also covered, from the Christian calendar to Jewish jubilee years and Islam. Images are used throughout the book, including a striking painting by Salvador Dali and pictures of various timekeeping devices. Space is also devoted to the French revolution, fascism, Marxism, North America (the ‘common era’), Cambodia and Korea.

Alexander Demandt has written an important book on a universal subject which will have a truly international appeal. The author’s perceptive consideration of the concept of time in past civilisations, including its mythological significance, is guaranteed to provide much food for thought for 21st century readers.

Alexander Demandt was a fellow in Ancient History and Cultural Studies at Free University of Berlin from 1974 to 2005. He has published widely on the Roman Empire, the History of Science and Cultural History.