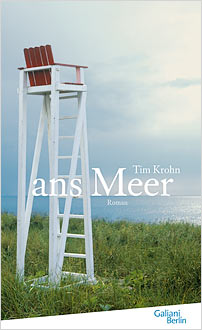 Anna and Josefa are inseparable, living almost like sisters in the large house that their parents share on the North German coast. But, having spent their teenage years in each other’s pockets, the sudden and tragic death of Josefa’s mother when the girls are just seventeen sends this apparently happy domestic idyll into freefall. So begins this moving and utterly compulsive story about individuals coming to terms with their past, about guilt and atonement, forgiving and forgetting, and about embracing one’s own fallibility in order to move on in life.

Josefa flees south to Switzerland after her mother’s death, while Anna stays in Germany, consumed with guilt – for the narrative suggests that Anna may be responsible for Margot’s death, since she was caught in bed with Margot’s husband just before she drowned in the sea. Yet the clever shifting perspectives of Krohn’s novel – each chapter focuses on a different character but the same events – leave the reader unsure of the real cause of Margot’s death (drowning? stroke? suicide?) and therefore unable to apportion responsibility to any one of the characters. The whole story is told from the vantage point of twelve years after the death, and Krohn uses this approach and the shifting focus to offer very different and changing views of the death and of the possible roles of the two girls and their fathers in that tragedy.

When Josefa returns to the coast with her son Jens, to show him where she grew up, she drops dead – of a stroke which may also have killed her mother twelve years before, and which therefore suggests that Anna need no longer blame herself for that death, after all. While both Anna and Jens’s father clamour for the custody of the boy, it is this youngest character who resolves the story’s uncertainties – he falls in love, ‘comes of age’ in his own right, and helps the older generations to move on. In a very moving scene, his mother’s ashes are buried at sea.

A skilful storyteller, Krohn grips his reader from start to finish, with characters so believable and engaging that they are missed when the novel reaches its close. What remains in their stead is a powerful sense of the possibility of forgiveness, of the ability of human beings to move beyond painful tragedies in their lives, and of the richness of character and experience in this eminently translatable story.

Tim Krohn was born in 1965 in Wiedenbrück and grew up in Glarus in the Swiss Alps. He lives in Zurich, works as a freelance novelist and dramatist and has been awarded numerous prizes and scholarships. Since the publication of his novel Quatemberkinder (1998), he has been considered a cult novelist in Switzerland and is extremely popular. Krohn’s last novel, Vrenelis Gaertli, reached No. 1 on the Swiss bestseller list.

Galiani Berlin is the new imprint under the roof of Kiepenheuer & Witsch, established in 2009 by Wolfgang Hörner and Esther Kormann – the creative minds behind the programme. They publish a mixture of literature, classics and narrative non-fiction in hardcover format only. The imprint is named after Ferdinando Galiani: a true genius who was interested in everything around him, innovative, unpredictable and never boring. This reflects the path that Wolfgang Hörner and Esther Kormann are following with their new imprint. Authors include Helen FitzGerald, Linus Reichlin, Karen Duve, Jan Costin Wagner and Martin Urban.