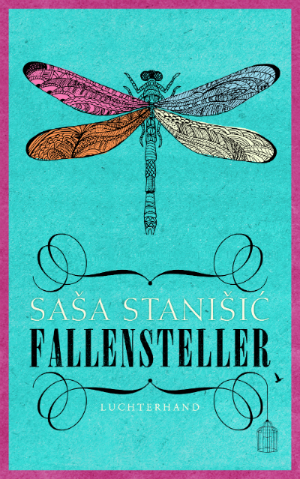 After two very successful novels, acclaimed author Saša Stanišić presents his first collection of short stories. With his characteristic wit, he tackles topics both absurd and embedded in reality.

The traps we set for each other are at the centre of this collection. People set traps and get caught in them, but throughout it all it is Stanišić’s playful approach to language that holds the reader captive. Stanišić himself sets a trap for the reader, luring them in with his skilful words, only to confront them with existential topics.

Several stories deal with the refugee situation and feature the same protagonists. In sets of three, these stories are interconnected. One of them centres on the narrator and their friend Mo, who travel the world. They join a group of human rights activists, travel to Sweden and encounter Syrian refugees. Another set of stories features the lawyer Horvath. He too sets out on his travels – to Rio, on a business trip. But when he gets there, his driver will take him anywhere but where he actually needs to go. On top of that, he loses his grip on language and thus on himself, until he is only able to understand the strangest of words. An even more surreal story centres on a factory in the former Yugoslavia that has cleared its throat and manufactures ‘a few modest dreams’. In the final and longest story we return to the scene of Stanišić’s previous novel Before The Feast, which was published in Anthea Bell’s translation last year (Pushkin Press). We are back in the village of Fürstenfelde where we encounter many of the beloved characters from the novel. A mysterious stranger appears, a trapper who only speaks in rhymes and promises to solve any problem, be it unwanted animals or interpersonal conflicts. But the author himself also makes an appearance…

Like Stanišić’s previous books, Trappers is a well-reviewed bestseller in Germany, full of funny, unique characters and absurd plot twists. A recurring character in the stories remarks, ‘That beast language has got its claws into me.’ Stanišić employs this beast in ever new and surprising ways. The games to be played with words are at the heart of this surprising, entertaining and endlessly rewarding collection.