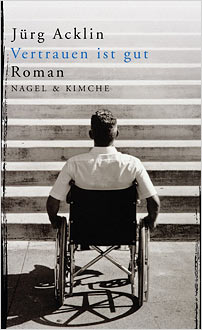 Forty-eight-year-old Felix has been confined to a wheelchair since childhood, due to brain damage sustained at birth. He was educated at a mainstream school in Switzerland and went on to university, where he excelled at languages. To the casual observer it would seem that he now leads a comfortable enough life with his novelist brother, his sister-in-law and their toddler son Daniel, housed in a pleasant, self-contained flat annexed to the family home and spending his free time reading, listening to music and typing up his brother’s manuscripts. He shares in the family’s social activities and has a budding relationship with a blind woman named Bernadette, whom he met at their local hospital.

What is not apparent to outsiders, however, is that Felix is plagued by overwhelming and irrational fears, which mainly stem from his unhappy childhood. Conceived as a last-ditch attempt to save his parents’ marriage, he was a child whose mother was ashamed of him: spiteful and overbearing, she controlled her disabled son completely until her death. His father, unable to tolerate her constant goading and her extra-marital affairs, walked out on the family, leaving Felix with a sense of abandonment and guilt. Meanwhile his brother, twelve years older than himself, has since poured all his efforts into trying to force poor Felix to learn to walk, and so be a ‘normal’ younger brother. Though wellmeaning, he has little patience with Felix and has a fiery and sometimes violent temper similar to that of their father.

Felix is typing up his brother’s latest novel, so rich in autobiographical detail that he is convinced it is a true reflection of what is currently going on. The manuscript recounts the story of a man – with the same job, home, past, and interests as Felix’s brother – whose wife has been brainwashed by a religious cult and is threatening to leave Switzerland for Germany taking with her their young son. The desperate husband starts to hatch plans for abduction and even murder to save his son from the clutches of the cult. Warning bells ring and Felix’s fears increase. Are Felix’s concerns a product of his over-active imagination? The crunch comes when he pulls out his father’s old gun.

This original, tense psychological thriller pits rational thought against imagination in a way that will make the reader’s pulse race.

Jürg Acklin was born in Zurich in 1945. After his docterate in social sciences, he worked as a teacher, then with Swiss television and now as a pyschoanalist in Zurich. This is his sixth novel with the same publisher.

Verlag Nagel & Kimche was founded in 1983 and quickly established itself as one of Switzerland’s leading publishers. Emphasis is placed on the work of contemporary Swiss authors. In 1998 Nagel & Kimche joined the Hanser group of publishers.