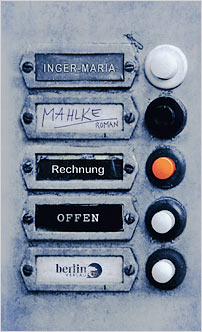 Inger-Maria Mahlke’s keenly-observed novel centres on the inhabitants of an apartment building in an up-and-coming district of Berlin, who look set to be usurped by wealthier tenants as the area becomes more fashionable. Mahlke scrutinises the effects of relentlessly consumerist city lifestyles on the lives of those who have the least consumer power.

All the novel’s characters have unsettled accounts – either with their landlord, each other, or themselves – which are variously taken care of in the course of the narrative. Claas, a psychotherapist and shopping addict who has spent all his money on porcelain figurines, is the owner of the apartment building and moves in to one of the flats after the collapse of his marriage. Claas’s daughter Ebba lives above him but rarely leaves her flat, apart from to blackmail the African dealers crowded into the ground-floor apartment into giving her drugs. Her parents are blissfully unaware that she has stopped going to college. Elsa has lived in the building since the war, the last of the old tenants. Gradually losing her grip on reality, she is paid regular visits by Nicolai, who claims to be her grandson, even though she has never officially had a child. And then there is nine-year-old Lucas, a compulsively neat boy whose only pleasure is video games. Lucas’ mother, Manuela, quits her job in a bakery to work as a dominatrix.

As the temperatures fall towards Christmas, all the stories spiral towards disaster. One of the dealers has a road accident but can’t go to hospital, not having official papers. Ebba pretends to have passed her exams; Elsa waits and waits for Nicolai to come, the teacups gathering dust on the table along with her memories. Lucas’ mother loses her new job after her regular client loses interest and then walks out on her son, who has to cope on his own. And Claas starts badgering his tenants so that he can get rid of them and charge more rent in this suddenly popular district.

Mahlke focuses on the darker side of city life and draws insightful portraits of people who lead precarious lives amid the affluence of others. Although we find out what happens to most of the characters at the end of the novel, plenty of unfinished business remains and there are no straightforwardly happy endings here. But this is nonetheless a very satisfying book which is sure to cement Mahlke’s reputation as a rising star of the German literary scene.

Inger-Maria Mahlke was born in Hamburg in 1977. She studied law at the Freie Universität Berlin and worked on various projects for the Department of Criminology. In 2009, Mahlke was the prize-winner at the 17th Open Mike, and in 2010 she was awarded the Klaus Michael Kühne Prize for her debut novel Silberfischchen. At the 2012 Festival of German Language Literature in Klagenfurt, she was honoured with the Ernst Willner Prize. Mahlke lives
in Berlin.