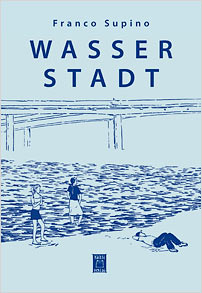 Franco Supino is an experienced writer who brings his considerable literary skills to bear in this high-quality young adult title. ‘Water City’ is a Swiss architectural project for a residential complex surrounded by an artificial lake, built on a site that was previously a dumping ground for toxic waste. The concept of the water city takes on symbolic significance in the novel and becomes a way of investigating the characters’ social values.

The novel’s three main characters, Ani, Elson and Züsi, come from completely different backgrounds. Ani’s parents are well-off and in the process of separating. When Ani moves in with her father to an apartment block in a fairly rough area she meets Elson, a shy, sensitive boy. Elson’s family is originally from Brazil and Elson has been shunted back and forth between Switzerland and Brazil, never really adjusting to either place. Elson spends his time playing basketball alone and amorously spying on Züsi, a young girl who lives with her father in a disused farmhouse on the city dump. The three teenagers are all struggling with their own problems, but when they meet over the course of one summer their lives become interlinked. The story emerges in the course of first-person narratives from the separate characters, each of whom recounts the summer’s events from their own perspective. Their growing mutual friendship allows them to challenge one another’s views on a wide range of issues such as social acceptance, money, first love, family break-up, bullying, eating disorders and the effects of social media.

Things are turned upside down when Züsi’s house is burned to the ground and Elson discovers a stash of gold that Züsi’s father has been burying at the dump over many years: so Züsi’s family, who have been poor throughout the novel, living as social outcasts on poisoned land, are now millionaires, while the supposedly wealthy and wellestablished family are struggling financially. As the summer draws to a close the three friends go their separate ways: Ani heads back to her family home as her parents patch up their marriage; Elson leaves school to train as a butcher, while wondering what he should do with the money Züsi has given him; and Züsi is sent to boarding school.

Water City is a tightly-constructed novel with a grittily realistic urban setting. The appealing characters, dramatic plot and down-to-earth tone make it difficult to put down.

Franco Supino Born in Solothurn in Switzerland in 1965 to Italian parents, Franco Supino was brought up bilingually (German and Italian). He studied German Language and Literature as well as Romance Languages and Literature in Zurich and Florence. Supino currently lives in Solothurn, where he teaches at the teacher training college.

kwasi verlag started publishing books for children and young people in 2013. It is managed by creatives, including authors and illustrators, who chair it as a platform for creativity, humour, spirit and freedom. kwasi verlag releases only a handful of ambitious, literary and artfully made books a year.