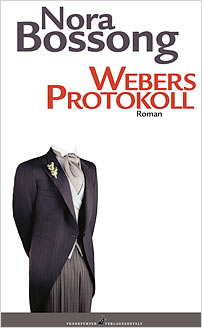 Konrad Weber, the central character in this pleasingly ambiguous novel, is an ambiguous character himself. A diplomat by profession, he is posted to Milan in the early 1930s, but at the time of Italy’s capitulation to the Allies in 1943 and Germany’s subsequent invasion of the country he begins to provide potential victims of Nazism, in particular those persecuted for reasons of race, with false papers to get them safely out of the way. His activities on this front put him personally at risk, to the extent that he himself is forced to make tracks. But there is doubt about his real motives.

In particular he is found to have embezzled money intended for the creation of a German school in Milan by transferring it to Switzerland, and this is a crime, even if he did not intend to keep the proceeds permanently. Nor is he well-regarded by the authorities of the postwar Federal Republic, and it is only with difficulty that he obtains a consular post at the new German embassy to the Vatican. Here he comes up against the consul, Palmer, a convinced Nazi with no traditional diplomatic training whom Weber, an old-style professional, despises as a vulgar upstart but who begins to ask awkward questions. More formidable still is the saturnine Wendler, who conducts experiments on animals and even, it is suspected, on a girl. He will later make a lot of money in textiles but meanwhile is content to make difficulties for Weber, on whom he definitely has something. Weber’s motives are later discussed by a young female character, who can be taken to represent the author, and an aged diplomat who remains unnamed, favourably on her side and unfavourably on his.

So who really was he? A Robin Hood without the idealism? Read the book and discover all.

Nora Bossong was born in Bremen in 1982 and now lives in Berlin. She has received several prizes for her writing, including the Leipzig Scholarship for her debut novel Gegend. Her poetry collection, Reglose Jagd, was also a prizewinner and in 2008 she won a scholarship to the German House at New York University. Nora Bossong recently spent six months in Rome, where part of this novel is set.