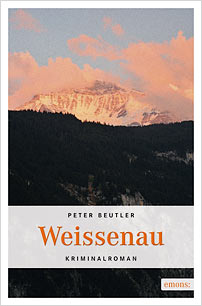 Peter Beutler’s gripping debut novel is based on a true story. Weissenau takes us far beyond the stereotypical national images of mountains and cuckoo clocks and draws attention to the rise of right-wing extremism in contemporary Switzerland.

Beutler’s hero is the young and idealistic Bert Lauber, a police officer who is investigating the brutal assault of a homeless person at a train station in Interlaken. Much to his surprise, Lauber encounters serious resistance to his enquiries among his own colleagues. Many policemen appear to be sympathetic towards the city’s neo-Nazi skinhead population. Lauber succeeds in linking his original case with a number of isolated attacks on foreigners and a drive-by shooting against a home for asylum seekers, and discovers that the culprits are members of a secret order of right-wing extremists. Beutler skilfully introduces an alternative narrative dimension by giving the leader of the skinhead order a voice and portraying his descent into extremist violence. Although Lauber apprehends the criminals in a dramatic show-down, right-wing politicians remain in power and the police force is still riddled with prejudice and corruption.

Weissenau is a striking thriller which delivers a poignant message about the darker side of Swiss society.

Peter Beutler, born 1942, grew up in Zwieselberg, a small village in the Bernese Alps. As a chemist, he was a teacher at the high school Musegg. Since 2007 he has lived with his wife in Leissigen near Lake Thun.

Emons Verlag was founded in 1984 by Hermann-Josef Emons in Cologne. Today the company is market leader in the Regional Crime sector, with 40 different series. Beside crime stories the publisher’s list has always included other titles with a regional background, such as historical suspense novels, guide books, atlases, illustrated books and non-fiction books concerning culture, history and the documentation of National Socialism. In 1995 Emons published Frank Schätzing’s Novel Death and the Devil, which has become an international bestseller.