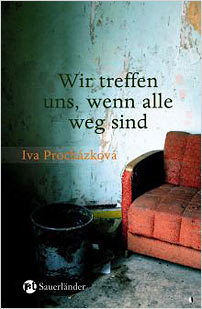 Set in the present-day Czech Republic, this is the story of one young man’s struggle for survival in a world struck by a killer epidemic. The disease, Erosion of Basic Substance (EBS), results in the sufferer’s body simply fading away, leaving nothing behind but his or her clothes. The cause is unknown – one psychiatrist not implausibly claims that it’s the result of overexposure to the mass media – but of course it produces the usual crop of bullying bureaucrats, in this case known as the ‘hygenists’, who put anyone who may have been in contact with the disease into quarantine camps resembling prisons.

Seventeen-year-old Mojmir, of Roma-gypsy descent, escapes partly because of his complete lack of interest in television, the internet or even newspapers, and partly because he is sent from the kindly children’s home in which he has been brought up to visit an old lady he calls Grandmother (Omi Kalomi or Grandmother Kalomi), which takes him away from Prague and into the isolation of the mountains. Does Kalomi have supernatural powers? If so they are very benign ones. She is dying of cancer but struggles against the disease for as long as she can to keep Mojmir by her side and safe from the city’s infection. The young man’s other friends are Egon from the children’s home, who aspires to manage a hotel on the Dead Sea while Mojmir wants to be a chef, the red-headed teenager Jessica, and a young Vietnamese boy called Vasek who is shot by hooligans when the disease has run its course.

This is a disaster novel of a distinctive and distinguished kind, with no absolute, cut-and-dried answers but plenty of food for thought. What lies behind suffering? Here the Martins, a devoutly religious couple, argue their view against darker interpretations. And the book links up with many specific crises of our time, from bird flu to terrorism to racism. And the setting, with the Czech Republic and Prague in particular continuing to grow as major tourist attractions, is not a minus for translation into English but a plus. In short, this well thought-out and highly readable novel has a great deal to recommend it.

Iva Procházková was born in 1953 in the Czech Republic and when she was ten her family moved to Germany. She has been writing books for children and young adults for many years and has won Germany’s most important prize for children’s literature, the Deutsche Jugendliteraturpreis, and has also been nominated for the Hans Christian Andersen Medaille.

Sauerländer Verlag was founded in 1807 in Switzerland by the Sauerländer family. It has been under the auspices of Patmos Verlag, Germany, since 2002. The list features high quality children’s and young adult works from picture and activity books to fiction and nonfiction. The extensive backlist contains classics by Jörg Müller, Kurt Held, Lisa Tetzner, and Christine Nöstlinger, among many others.