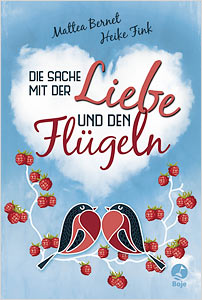 Thirteen-year-old Meeri Ehrlich is having a difficult time. She misses her deceased mother terribly, but her father is already trying to find a new wife; her younger brother is being picked on by the village gang; and Meeri has fallen head-over-heels in love with her nextdoor neighbour Rocco, who has eyes only for his girlfriend.

Meeri’s love for Rocco reveals to her an amazing family secret: falling in love comes with the gift of flight. Soon Meeri is unable to speak to Rocco or stand near him without accidentally taking off! Although this is initially alarming – not to mention awkward at parties – she soon learns to control her flight and to use it to her advantage. But as long as her love remains unrequited, she will always fly alone.

Between her attempts to sabotage her father’s new relationships, watching out for her brother and dreaming up ever crazier ways of propositioning Rocco, Meeri has a lot of things to juggle. It takes a while for her to notice Rocco’s shy younger brother Matti – and to discover that when love is mutual, it gives you both wings!

Mattea Bernet studied Theatre and Film at the Freie Universität Berlin and at the Academy of Media Arts Cologne. She has worked as a film producer, film director, and screenwriter, and has garnered numerous awards for her efforts.

Heike Fink studied Literature and Applied Social Studies. She has worked as a journalist, author and screenwriter and has received several awards and scholarships. Together with Mattea Bernet, Fink was nominated for the German Screenwriting Award for Die Sache mit der Liebe und den Flügeln.

Boje Verlag has been publishing books for children aged 3-15 for more than sixty years. Boje is known for its high literary and illustrative standards, and has published works by many renowned authors and illustrators. Boje became an imprint of Bastei Luebbe AG in 2010.